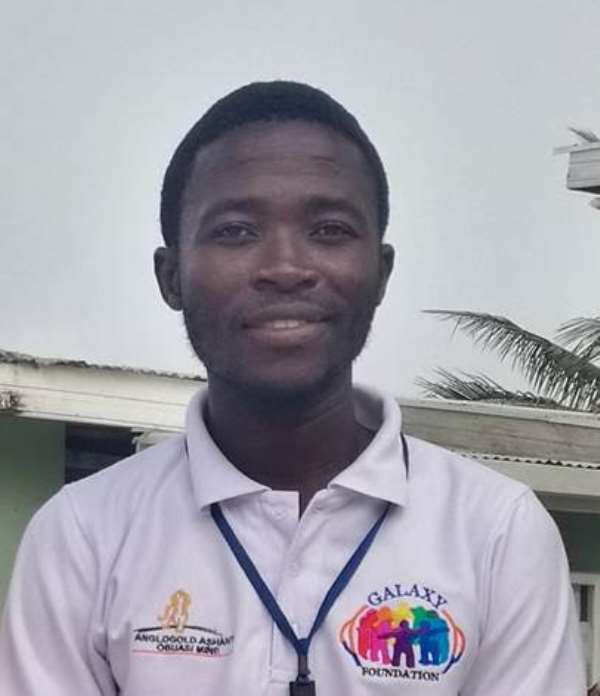 Death, they say, is inevitable but the saddest part is hearing the death of someone who is taking care of you and many poor people.

The 29-year-old David Hagan had beautiful dreams growing up but when death laid its ugly hands on his father at a very primitive age, his dreams crashed down.

"I lost my dad right after JHS. When he died, things changed so fast that sometimes we had to beg from family and friends to eat. I struggled through secondary school," he recounted.

What struck him most yet urged him to challenge himself, was when he was on his way to school, saw a young lady with her mum begging for alms by the street just to feed themselves.

"Instantly, something struck me and I felt it was time for me to make a change. I had nothing but I was determined to make sure people lived a good life, and that’s when I started Galaxy Foundation,” he intimated.

Meet David Hagan, a 29-year-old man who was determined to make a difference in his community although he had nothing. He is the founder of Galaxy Foundation, situated in Obuasi in the Ashanti region.

Recounting life's difficulties, David was compelled to start his foundation 7years ago out of the desire to help the marginalized in society using his experience as a testimony to inspire others. Without any source of funding, he engaged his friends and some benevolent organizations to help him bring this dream to life.

Today, his Foundation houses over 210 patients, both children and adults who have undergone surgeries ranging from cleft palate, hernia and other abnormal growths pro-bono. Over 2000 people in deprived communities have also benefited from free health screening and donations to needy homes.

Additionally, he stressed that the Foundation also funded by proceeds mobilized from Facebook followers, churches and also solicit for support from surgeons who can offer their services at a lower cost.

Prince Osei, the one who nominated David Hagan for this year's MTN Heroes of Change Season said, “this project is saving lives and taking burdens away from families; I feel motivated seeing what a young man who can mobilize over $8,000 to organize surgery for someone he knows from nowhere touched my heart and decided to nominate him for this year's edition so that he can get more support to do more.”

Corporate Services Executive of MTN Ghana Mr. Samuel Koranteng said “we initiated the MTN Heroes of Change to identify and reward projects such as Galaxy Foundation.

MTN Heroes of Change Season 5 was launched in November 2018 and submission of entries ended on 25th January 2019.