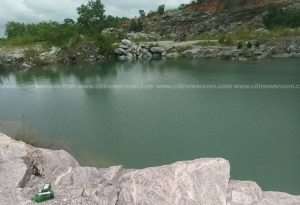 A sixteen-year-old boy has met his untimely death after he drowned in an abandoned quarry pit filled with mud water at Gomoa Aprah in the Central Region.

His colleague has also been hospitalized and is currently receiving treatment.

Araba Eshun, mother of sixteen-year-old, Kobby, now deceased, explained that she heard of his son’s death through a friend adding that his son would have been alive today if the owners of the quarry had covered the pits they dug.

“My son would have been alive today if not for their mistakes,” Araba Eshun said.

She explained that her son is not the first person to have drowned in a pit in that area adding that innocent children have fallen victim to such ordeal.

“The owners of the quarry must do something about the pits that have not been covered because innocent children are dying because of the pits.”

Speaking to Citi News in an interview, the assembly member for the Budumburam electoral area, Prince Odoom explained that 16-year-old Kobby together with his friend went to the pit to swim but Kobby got drowned in the process.

“Kobby went to the pit to swim with his friend but got drowned in the process while his friend who managed to survive is receiving treatment at the hospital,” the assemblyman said.

According to him, various communities around the quarry site usually go to the pit to fetch water from them although it is dangerous.

He also apportioned blame at the doorstep of the management of the quarry “for not following safety standard since they refused to cover the pit they dug.”

He is hopeful that Kobby’s untimely death will be a wake-up call for operators of the quarry to do something about the situation.

“I also want call on government to help us in this situation,” the assemblyman added.