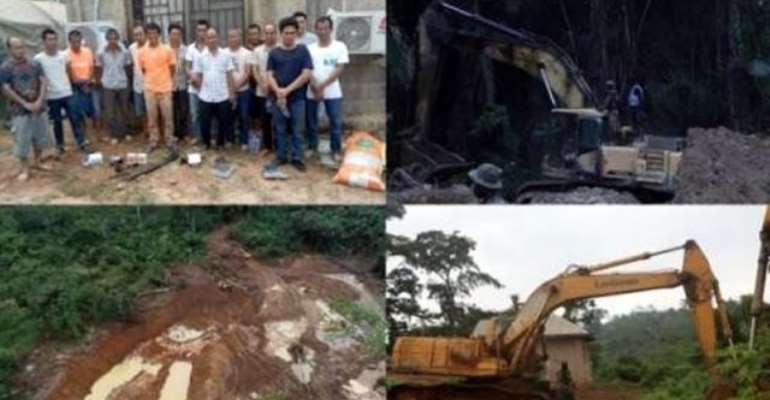 The Operation Vanguard taskforce stationed at their Forward Operating Base in the Western Region on Saturday apprehended 15 suspected Chinese illegal miners in the Juaboso District in the Western North Region.

This was contained in a statement issued to the Ghana News Agency by Captain Andy Sowatey, Public Relations Officer of Operation Vanguard.

The statement said the operation, which was carried out simultaneously at different sites within the general area of Bonsai in the morning at about 5:30 a.m also resulted in the seizure of five excavators.

"Both the suspects and equipment have been handed over to the Inter-Ministerial Committee on Illegal Mining for further action.

"Galamseyers have resorted to operating deeper into the forest areas of the Western North Region as the Taskforce have extended its operations into those areas. Vanguard will, however, continue to fish them out regardless.

"Due to their reliance on locals, some of the illegal miners are proving more difficult to apprehend because these spies have been warning them of the Taskforce as and when they approach their sites.

"Some of the locals also harbour the illegal miners in their homes and are reluctant to give them up when their activities are reported, an action which is contrary to Section 99 (4) of Minerals and Mining (Amendment) Act, Act 900.

"Operation Vanguard is, therefore, sounding a word of caution, to not only the illegal miners but also their local accomplices that both actions are against the law.

"Any individuals found to have been providing any form of support for these galamseyers will be arrested during the course of future operations", the statement said.