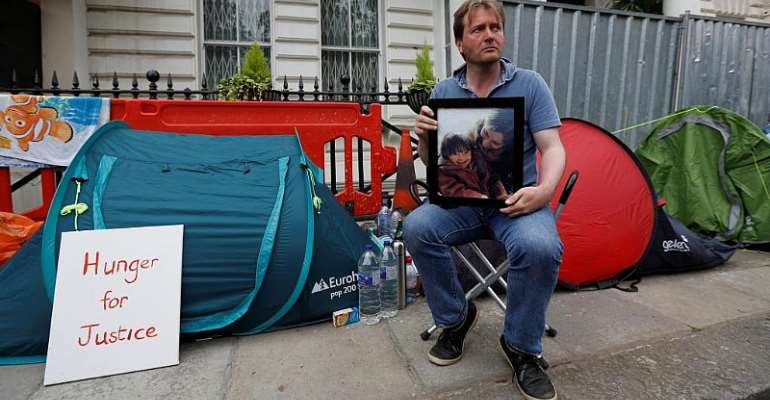 London continues to call for the release of British-Iranian national Nazanin Zaghari-Ratcliffe, while she and her husband embark upon a joint hunger strike in an effort to push Iran to release her.

Sunday marked day eight in Richard Ratcliffe's hunger strike. His wife has been imprisoned in Iran since 2016 on charges of trying to topple the Iranian government. She is serving a five-year sentence.

Zaghari-Ratcliffe was in Iran visiting her parents when she was stopped at the airport before flying back to the UK.

Her daughter was taken away and remains in Iran at the house of her grandparents.

Ratcliffe has been denied a visa to Iran to visit his wife and daughter.

Zaghari-Ratcliffe was temporarily released last year in August, but had to return shortly after.

Hungry for action
This is the second hunger strike by Zaghari-Ratcliffe, a project manager at the Thompson Reuters Foundation, following the first one in January.

Iran has refused repeated calls from Britain to release her.

In protest against the refusal of Iranian authorities to release her, to grant Ratcliffe a visa to visit her or to allow the British embassy to check on her health, the pair went on hunger strike – Zaghari-Ratcliffe from within the prison and her husband outside the Iranian embassy in London. He has vowed to remain there in solidarity with his wife until she ends her hunger strike, or until she tells him to do otherwise.

The hunger strike has been criticised by Iran's ambassador to the UK saying it has made working there impossible and has put pressure on diplomatic staff.

“He is now blocking the entrance of our embassy and the peace of mind of our staff is in complete despair,” said Ambassador Hamid Baeidinejad.

Boris Johnson blunder
Her case wasn't helped when then Foreign Secretary Boris Johnson told UK parliament that Zaghari-Ratcliffe's detention on sedition charges was a mockery of justice as she had been "simply teaching people journalism" in Tehran.

Her family strongly denied his claims and added that his comments only made the situation worse.

With frontrunner Johnson in campaign mode to become the next prime minister, Ratcliffe broke his silence at his strike in front of the Iranian embassy to say he sees the former foreign secretary as a potential threat to national security.

He said Johnson of making mistakes and false promises that enabled Iran to discredit any case in favour of his wife's release.

In a video posted on social media, Ratcliffe pleaded that the incoming prime minster help his wife.

An online media campaign called #FreeNazanin continues to amass numbers in support of her release.