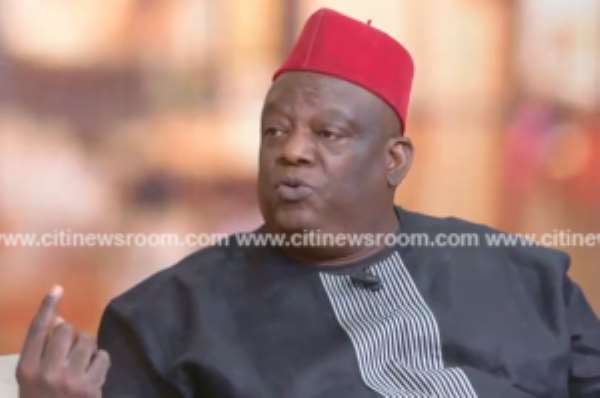 The Director of Business Operations at Dalex Finance, Joe Jackson says the National Democratic Congress (NDC) is responsible for the financial challenges facing the energy sector.

Mr. Jackson on The Big Issue on Citi TV/FM said the NDC government’s decision to sign power contracts that led to huge sums of money being paid without power being generated has contributed to these challenges.

“There is an albatross sitting over the necks of the power sector and the NDC must take full responsibility for it. Those power contracts that were signed in their time with capacity charges are shameful and they are killing the sector because you are paying money without a single unit of power being generated. That is what undermines NDC’s moral authority on this issue.”

Mr. Jackson’s comment comes days after the Minority in Parliament disputed President Nana Akufo-Addo’s claims that he inherited a $5.2 billion debt from the Mahama government.

The President reportedly made the claim during a meeting with the Ghanaian Community in Canada recently.

He reportedly said, “his government inherited a $5.2 billion debt in Ghana's energy sector from the previous Mahama-led National Democratic Congress (NDC) administration, half of which has been paid, while the remainder hanged on the neck of his administration like an albatross.”

President Akufo-Addo per reports also said that “the situations responsible for the constant power outages Ghanaians were forced to endure, were from the previous Mahama-led administration.”

But addressing the press in Parliament on Thursday, Ranking Member on the Mines and Energy Committee, Adam Mutawakilu refuted the claims saying the Minority does not only find the said statements as inaccurate “but also [see it as] an attempt by the President to shirk responsibility for the incompetence he has displayed in the management of the country's energy sector which remains a backbone to the Ghanaian economy.”

Mutawakilu further challenged government to provide details of its management of the energy sector.

“The Minority Caucus in Parliament is calling on President Akufo-Addo to provide further and better particulars on his claim that the NDC handed over a debt of $5.2 billion on the energy sector. Account to Ghanaians on how the monies raised from ESLA have been utilised. Explain to Ghanaians how the government intends to pay the debt owed the utilities to provide the required liquidity in the sector.”

“The Minority wishes to assure President Nana Akufo Addo that it will expose any attempt to deceive Ghanaians and to cover up the incompetent display in the governance of the country which has brought untold hardship to our poor citizens,” he added.

Mutawakilu at the press conference also insisted that President Akufo-Addo “peddled falsehood with respect to what has come to be called Legacy Debts, when he addressed a town hall meeting of Ghanaian residents in Toronto, Canada.”

He explained that in February 2017, when President Akufo-Addo delivered the State of the Nation Address to Parliament, he disclosed that “the power sector debt stood at $2.4 billion at end 2016.”

He added that, in June 2017 when the President addressed the opening of the 2017 World Bank Development Finance Forum in Accra, he disclosed that government would soon issue a $2.5 billion bond to offset the Legacy Debt of the energy sector in order to create space for increased investment.

“Today, the Minority Caucus is unable to accept the President's claim of $5.2 billion energy sector debt created by former President Mahama during his tenure,” the Ranking Member on Parliament’s Mines and Energy Committee added.

Anti-LGBT Bill: Let's be careful and not generate intense ha...
53 minutes ago