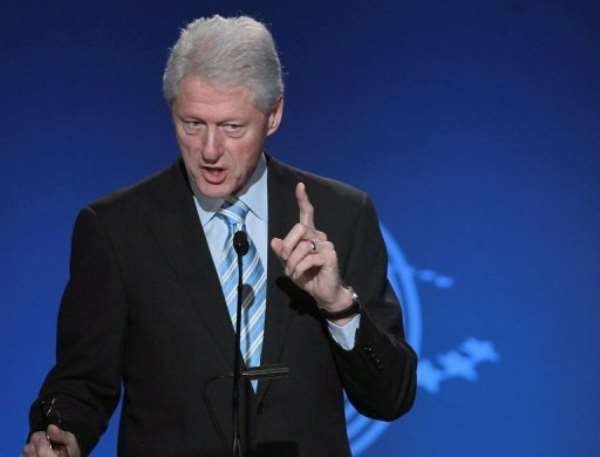 The Balkans has often been prone to seizures of mysticism, glum prediction and predation. But one character felt at home as he addressed his audience in Kosovo, himself having been afflicted by a certain evangelical urge. This month, former US President Will Jefferson Clinton, keeping company with former Secretary of State Madeleine Albright, were rubbing shoulders with officials and stage hands in Pristina to commemorate the twentieth anniversary of the Kosovo intervention by NATO in March 1999.

It was a chance Kosovo’s president Hashim Thaçi was not going to let pass. In being awarded the Order of Freedom, Clinton was all praise. “I think the whole world today with all this turmoil, can look to Kosovo as an example of a democracy and a commitment to prove, grow, and live in peace with one’s neighbours.” Being Clinton, his words have a profound lightweight quality, albeit dressed up as grave and morally hefty.

Nonetheless, they struck the appropriate, ceremonial note. Thaçi glowed with appreciation. “We thank you for the just decision to stop the Serbian genocide during 1999. We are very grateful for the support of the US to Kosovo. The story of Kosovo is a story of joint success. You are our hero.”

Clinton duly responded, expressing pride at having been the “president of the United States when you needed someone to stand up and say no more ethnic cleansing, no more people running out of their homes, no more killing innocent civilians, there’s got to be another way.”

Misnamed humanitarian interventions are nasty, untidy things. They ride on the wave of emotional simplification, embellished by the force of ghastly imagery and eye-moistened grief. As UK Foreign Secretary Douglas Hurd would note as the crisis in Yugoslavia deepened in blood in 1992, taking a swipe at the seductions of the idiot box in a much quoted speech at the Travellers’ Club in London, “the selection of these tragedies is now visible within hours to people around the world. People reject and resent what is going on because they know it more visibly than before.” As news reporter Martin Bell would reflect, a variant of this point had been made by the essayist and novelist G.K. Chesterton: “It’s not the world that has got so much worse, but the news coverage that has got so much better”.

Yet such coverage can be suspect not because it inaccurately portrays horror, but that it does so from one, captured vantage point. Participants assume the roles of innocent victims and stained perpetrators. The NATO intervention, given its Clinton white wash, removes references to attacks on Serbian civilian targets and infrastructure and the acceleration of the cleansing efforts by Serb forces in Kosovo-proper after the bombings began, suggesting a less than rosy account of Operation Allied Force.

The neatness of such commemorative occasions as took place in Pristina unduly purifies. It ignores such assessments as those from Robert Gelbard, Clinton’s special envoy to the Balkans, who deemed the Kosovo Liberation Army “a terrorist group” in comments made on February 23, 1999. In March that same year, Gelbard appeared before the House International Relations Committee to modify his response, claiming that the KLA had “not been classified legally by the US government as a terrorist organisation.” That said, he did explain to law makers that “terrorist” acts perpetrated by the KLA had “provided an excuse for [Serbian President Slobodan] Milošević.”

Even with the embers still bright, Jeremy Harding remarked in an August issue of the London Review of Books how “in the former Yugoslavia, a loss of any kind often insinuates itself into the annals of gain, while short-term winners – Kosovo Albanians, for instance – can barely distinguish what they are meant to have won from all the have lost.”

Serbia’s Foreign Minister, Ivica Dačić, if predictably, had a rather different reading of the anniversary. When the 78-day aerial bombing initiated by a US-led NATO force commenced on the rump of what was left of Yugoslavia, it did so without UN Security Council authorisation, a rebuff to the UN Charter. Those powers, Dačić said accusingly, became colonisers. The pathway to Kosovo’s 2008 declaration of independence had been less paved than bombed, and this small stretch of territory became a European headache of monumental proportions, punctuated by annual clashes between the Albanian majority and Serbian minority ever fearful at their own expulsion.

Last year’s decision to transform the Kosovo Security Forces into a more traditional military fighting force could hardly be said to be in line with neighbourliness, but realities on trodden Balkan ground were always rather different from Clinton’s distracted interpretations.

While Clinton was being cheered in Pristina, the humanitarian credo in international relations had a vital co-conspirator in British Prime Minister Tony Blair. It was Blair who girded the Kosovo intervention with a doctrine and flogged it before assemblies and fora with gravity and conviction. Before the Chicago Economic Club in April 1999, he drew back the curtains on the “Doctrine of the International Community”, showing the usual spin and ease with terms that proved to be the hallmark of New Labour.

Central to the meretricious doctrine is a contention that cruelty has one face – or a set of faces – clearly discernible, and, to that end, identifiable for punishment. “No one in the west who has seen what is happening in Kosovo can doubt that NATO’s military action is justified.” Bismarck, he contended, was wrong to suggest that the Balkans were not worth the bones of one Pomeranian Grenadier. “Anyone who has seen the tear-stained faces of the hundreds of thousands of refugees streaming across the border, heard their heart-rending tales of cruelty or contemplated the unknown fates of those left behind, knows that Bismarck was wrong.” Hurd, hard boiled realist, would have recoiled; but Blair was the prime minister of image, the confection, the sound bite.

The Kosovo intervention remains an object lesson on how misguided the messianic instinct can be. Coupled with the astonishing shallowness that governed much of the President Erect’s time in office, one marked by squalid scandal and the desperation for foreign distractions, NATO gave birth to a monster that has been reprised in several forms since.

The worst of these is the Responsibility to Protect Doctrine, a cheeky number that discards the “right” to intervene in favour of an obligation to protect. But the record of this less than illustrious doctrine is patchy, even disastrous. The International Commission on Intervention and State Sovereignty in 2001 tried to underpin the interventionist doctrine with procedural caveats – the need for verification of atrocity, for instance, and the logistical requirement that infrastructure would be spared – but such neat precautions disappear in the red mist fog of war. As unfolded in Libya in 2011, cruise missiles do little in the way of promoting humanitarian, let alone humane outcomes.