Focus on Africa: Ramaphosa between a rock and a hard place 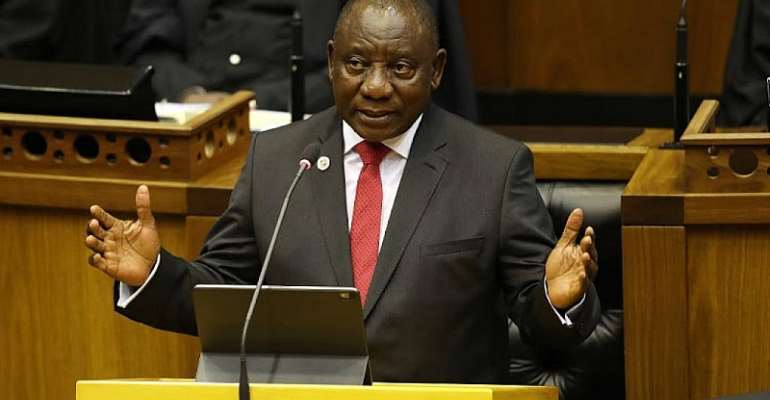 South African opinion is split over President Cyril Ramaphosa's promise to fast-track the delivery of his “New Dawn” agenda to move the country forward.

In his third State of the Union address the President dampened expectations with an offer to create two million jobs for young people within the next ten years in a nation that has 10 million unemployed citizens.

Dampened expectations
“People had expected the president to announce concrete plans to roll back youth unemployment running at a rate of up to 55 percent”, observes Thabo Mokone, parliamentary editor for the Johannesburg-based Sunday Times.

“We have a new plan called 'Dreams'” fired back a furious Economic Freedom Fighters leader Julius Malema, in comments published by the Johannesburg Star.

According to Malema the two million youth jobs promised by Ramaphosa fall short of the 11 million earmark for 2030 in the country's National Development Plan.

Ramaphosa's failure to set budget benchmarks for his health care big bang and the lack of details about how he hopes to provide well-located houses and land for the poor is intriguing.

ANC in factions
So too are the factional wars taking place inside the ruling African National Congress as sidelined veterans loyal to ousted President Jacob Zuma stage an attempt to regain lost ground by taking control of key parliamentary commissions.

Business Day reacted to the scramble for committee post within the ANC parliamentary caucus wondering "if Ramaphosa was too weak to prevail".

The nomination of tainted MPs to committees is a sign that the Zuma faction is able to sabotage his reform agenda, said the economic daily.

“The question for South Africans is whether Ramaphosa, who is navigating these shark-infested waters can deliver on the promises, argues Mail and Guardian political affairs correspondent Natasha Marrian.

Eskom in force majeure
South African commentators welcome President Ramaphosa's plan to bail out the debt-ridden national power utility Eskom which to Marrian describes as “a threat to the national fiscus”.

Eskom, which has plunged the country into darkness with load shedding late last year, approached the National Energy Regulator of South Africa on Tuesday for a 15 percent hike over the next three years, saying its business model needed to be overhauled. This is according to the Johannesburg Star.

The company ows its creditors close to 500 billion Rand and “only has sufficient cash to meet its obligations until the end of October 2019”, according to Thabo Mokone of the Sunday Times.

"We expect that the new SIU Special Tribunal will start its work within the next few months to fast-track civil claims arising from SIU investigations, which are currently estimated to be around R14.7bn", said the President.

His remarks didn't stop didn't stop the opposition from dismissing the speech as just “a pipe dream”.

DA leader Mmusi Maimane called the SONA  “a state of no action containing a lot of empty promises".

Potholes
“President Ramaphosa got to talk about his dreams of what the country could look like and was shouted at by opposition MPs who said they did not pay him to dream” joked City Press.

“The time for speeches is over, now it's time to get down to work”, comments Amanda Watson of the Citizen newspaper.

For Mail and Guardian “it is clear that his address was not a victory speech, but the genesis of a journey for economic and political reform, lined with many potholes”.