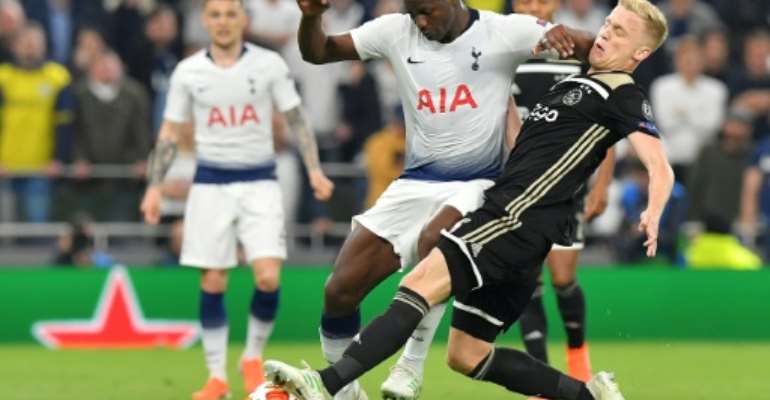 Victor Wanyama, who as a child played on the streets of Nairobi until his bare feet bled, leads Kenya into the Africa Cup of Nations on Sunday just weeks after helping Tottenham to the Champions League final.

Wanyama is the figurehead of a Kenyan team that has its work cut out to advance from a group including Algeria, Sunday's opponents, and star-studded Senegal as well as rank outsiders Tanzania.

The uncompromising midfielder is an icon in his homeland, where football fanatics number in the millions but whose players rarely reach the highest level of the club game.

Wanyama's low-key approach, despite an annual salary reported to be way in excess of three million pounds ($3.8 million, 3.4 million euros), has earned him additional respect in Kenya.

"Victor is a very popular guy because he is a bit laid back, not too flamboyant. He doesn't like showing off," says Kenyan journalist Elias Makori.

"He earns a very tidy sum from Tottenham, but you don't see it showing around."

Thanks to Wanyama, Tottenham have become fashionable in Nairobi, where fans traditionally support Arsenal or Manchester United.

"He has remained very humble, and he has not forgotten his humble origins," said his cousin, Harrison Osotsi, noting that Wanyama is always keen to help young footballers back home, providing equipment, or even welcoming them to London in groups.

The Nairobi native, raised in a family of 11 children, made his debut on the dirt streets of Land Mawe, a neighbourhood at the time reserved for employees of the Kenyan railway company, for whom his mother worked.

Pitches like this one were where Victor Wanyama learned to play football. By TONY KARUMBA (AFP/File)

"He used to play barefoot, and sometimes he would bleed, but he kept going," his cousin recalled. "When he got his first shoes, he had trouble getting used to them ... he wanted to take them off, but he got used to them in the end."

His father, Noah Wanyama, a former Kenya international, remembers Victor following along to training in his early days.

"Victor and the other boys would accompany me to the stadium and carry the sports bag for me when I went for football training or playing (matches)," he said. "They were quick to learn the tricks in the sport."

"I am happy I did instil a lot of discipline and hard work in my children," said Noah, who can boast of raising two sons that reached the Champions League final. Victor's elder brother, Macdonald Mariga, was part of Jose Mourinho's Inter Milan squad that won the title in 2010.

Victor's rise was rapid, with a first call-up to the national team at just 15 for a friendly against Nigeria.

A precocious, yet raw, talent, he was sent to Sweden to toughen up before moving on to Belgium. At 20 he signed for Scottish giants Celtic, where fans still fondly remember a goal he scored during a 2012 Champions League victory over Barcelona.

A year later, he became the first Kenyan to play in the Premier League at Southampton, before switching to Tottenham in 2016.

After a strong debut season with Spurs injuries hampered the next two seasons, though he returned to start both legs of Tottenham's dramatic semi-final against Ajax only to watch the 2-0 defeat to Liverpool in Madrid from the bench.

Despite that setback, his journey "is a source of inspiration and motivation for other players in the national team", says Makori.

"People look up to him as a good leader, a mature person, somebody who knows how to invest your money and how to behave as a leader."

Kenya, ranked 105th in the world, will need their captain and best player to lead from the front as they embark on their first Africa Cup of Nations since 2004.

"For me, the coach, and for the rest of the staff, we are happy to have a player who is able to compete at this level," says Kenya boss Sebastien Migne.

"It will help us to send a message to our opponents. We have one of the finalists of the Champions League in our team. In terms of confidence, it will be perfect for us."