The Continuous Stay Of Western North Regional Minister, His Deputy In Office Will Hamper Our Needed Development—NDC 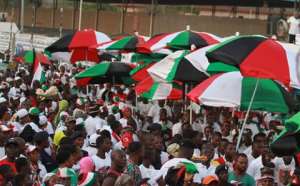 Ladies and gentlemen, this press conference will specifically deal with the current and ongoing feud between the Western North Regional Minister and his deputy ie Hon. Kingsley Aboagye Gyedu and Hon Alex Tetteh. It is instructive to say that the ongoing feud between the two government appointees didn't start today but initially we all thought it was one of such mere speculation until a letter dated 11th June, 2019 was sighted which in that said letter contains numerous complains made against the person of Hon Alex Tetteh by his minister, Hon Kingsley Aboagye Gyedu. This letter was addressed to the Hon. Minister of Local Government asking her to take action.

Ladies and gentlemen, in that letter, the Hon Regional Minister posited inter alia that;

1. The Deputy Regional Minister submitted names to the Office of the Local Government Service for recruitment as drivers without consulting him (Regional Minister). Ladies and gentlemen, the DRM according to available information recommended for the appointment of five drivers from Akontombra his constituency only to satisfy his interest as against the other Districts. The selfishness of the DRM is at it height and he must be stopped. To ensure development across the region, one would have expected that opportunities be shared evenly for all.

3. The DRM created a Whatsapp page for the MMDCEs and intentionally leaving out the RM.

Ladies and gentlemen, this amount to gross insubordination and acts of usurping the authority of the RM. This act has the tendency of creating disunity amongst the MMDCEs and will adversely affect the development of the region. The DRM upon creating this page, incited the MMDCEs against the RM. The DRM has been acting very funny against the person of his boss.

4. The DRM commandeering four RCC pick up vehicles to work in his constituency (Akontombra) for one full week without his knowledge.

Ladies and gentlemen, how on earth can a Deputy Regional Minister Command four vehicles to work for his personal gains as against the entire development of the region? This is unacceptable and amount to abuse of office. The work of MP is totally different from that of been a minister or deputy. This act cannot be tolerated. We therefore wish to know from the DRM the following; 1. Who fueled the cars to go work in his Akontombra constituency for that full one week? 2. Who bears the maintenance costs of the vehicles? If it is at the cost of government then the Deputy Regional Minister should be arrested because what he did was unlawful.

5. The DRM intervenes and interrupts at will during meetings when the RM is talking.

Ladies and gentlemen of the press, this act is disgusting and very unproductive. How can the region develop when meetings which are intended to discuss the development of the region are interrupted at will by a deputy regional minister? Nothing good can come out from such meetings.

6. The DRM deliberately withholds information from him and act in his stead to make him look bad before the Chiefs and people of Sefwi Wiawso. Ladies and gentlemen, the RM cited the visit of the Vice President to the region as an example. In that said visit, the RM said the DRM kept the information from him till two days to the visit. This situation even though very immature on the part of the DRM, it however shows the RM isn't regarded as he thinks he may or is. All correspondence to the region indeed must come through the RM and if this isn't the case then there's a problem.

7. The Deputy Regional Minister organizes Regional Security Council (REGSEC) meetings without his knowledge and giving instructions to security personnel to counter his instructions and directives.

Ladies and gentlemen, the Hon Kingsley Aboagye Gyedu (Regional Minister), cited the chieftaincy case of Sefwi Bekwai and Bodi as practical examples. This indeed we find very serious! The security of the region cannot and shall not be allowed to be joked with.

Ladies and gentlemen, now that there is seeming insecurity in the country with increasing cases of kidnappings and violent acts by both known and unknown groups such as *Delta Forces* and the likes, we shall not allow for the sake of power struggle, the two incompetent and inexperienced appointees plunges this new region into chaos.

Ladies and gentlemen, it is a statement of fact that Hon Alex Tetteh the Deputy Regional Minister actually sent 20 police personnel to Bodi with 40 on standby to provide police security without no recourse to the District officials. This action of the Deputy Regional Minister had serious security implications on the Bodi District. This single act could have resulted in chaos if the people of Bodi had decided otherwise.

It is also important to note that the Deputy Regional Minister didn't have the consent and approval of his boss the Regional Minister before taken this singular decision. Ladies and gentlemen, it is surprising to also know that all the cost associated with the police sent there were borne by the Bodi District Assembly with no cost to the RCC. Ask yourself how much is both their Common Fund and Internally Generated Funds now that the Common Fund isn't forthcoming?

Ladies and gentlemen, we all know for a fact that the DRM has no absolute right in taken any decision on behalf of the RCC since the Chairman for REGSEC is the RM unless of course he has the authority of his minister which in this case never happened. What actually is the interest of the Deputy Regional Minister?

We find these issues raised unhealthy for our development as a new region. The afore mentioned clearly depicts the high level of incompetence on the part of the Regional Minister as not been on top of issues and one that cannot handle the region. It again shows how disrespectful and insubordinate the Deputy Regional Minister can be. This attitude can't develop the region.

Ladies and gentlemen, we wish to bring to your attention the high level of incompetence on the part of Hon Alex Tetteh both as DRM and a Member of Parliament for the Akontombra constituency. To willingly disrupt meetings shouldn't be tolerated at all. This act can't help us in developing as a region and we frown upon ASAP.

THE PRESIDENT IS PARTLY TO BE BLAMED

We definitely know many will be amazed and question why the President can be brought into this? The answer remains simple, none of the two appointed themselves. Article 78 and 79 of the 1992 constitution grants the President the powers to appoint ministers and deputies. So if a minister or deputy misbehaves who should we blame? Certainly the appointing authority who happens to be the President.

Ladies and gentlemen, it is also worthy to note that as good citizens and party, we expressed our concern with respect to the appointment of two MPs as Regional Minister and deputy. This we believed will stagnate the development of the region as well as causing the ongoing problems. Often times when two MPs are appointed to same ministry, none wishes to submit. This is because they all feel they have been voted for and represent certain constituents. Unfortunately the President turned a blind eye and deaf ears to our good counsel which has now resulted into the current fisticuffs between the RM and DRM. Ladies and gentlemen, the President is part to blame and the reason we have already stated.

Again, the President though not enjoined per article 79 and article 256 (2) of the constitution which states that the President may consult a minister before appointing a deputy, for the sake of cohesion and unity, the President could have consulted the minister. The President in this case appointed them same time which we felt didn't auger well. Where was the President rushing to?. The incompetence of Akufo Addo is the be blamed.

REASON FOR THE CREATION OF THE WESTERN NORTH REGION

Ladies and gentlemen of the press, it is imperative to note that the creation of the Western North region which we all made sacrifices both in cash and kind was premised on ensuring development and not this disgusting and needless attitude been exhibited by the clueless and incompetent RM and the DRM. It is extremely unfortunate that this childish and barbaric attitude of the RM and his deputy hasn't only brought them shame but has subjected the image of the Western north region to public ridicule. Ladies and gentlemen, we are now seen as non serious region among other regions. Whereas other regions are busy lobbying for projects to develop, our RM and DRM are busy fighting each other unnecessarily.

Ladies and gentlemen of the press, we are assuring the general public and the entire citizenry of the Western North Region that we shall not allow for any selfish individual or persons to destroy our infant region sake of their personal gains.

Even though the President cannot exonerate himself from this issue, we are calling on him to take the following actions if indeed he has the development of the region at heart;

1. The President should as a matter of urgency sack the Regional Minister and his deputy.

2. The DRM has a sinister motive and such mindset can't be used in nation building and as such we call on the President to dismiss him as soon as possible and should not even consider him for a future appointment.

3. The President should in future appointments to the region, conduct proper investigations into the said persons to unearth their preparedness in helping our region grow*.

Ladies and gentlemen, how can we continue to pay clueless and incompetent people with our scarce resource if the President decides to keep them? This could only mean that the President cares less about our development as region. The taxes we pay must be used judiciously and not waste it on incompetent people such as Hon Aboagye Gyedu and Hon Alex Tetteh.

It is very unfortunate these two inexperience and power drunk personalities are also MPs representing innocent people. Ladies and gentlemen, we strongly believe that the dismissal of these two will bring peace and sanity in the region and will accelerate the development we desire.

Anyway are these two incompetent people part of the 'men' the NPP say they have? If yes, this this is very pathetic! It would have been better we have no RM or DRM rather than these seeming learned people but empty in reality in terms of Public Administration. Ladies and gentlemen, I must say these men if in NDC do not qualify even as 'boys' to be considered for the appointment of watchmen.

Ladies and gentlemen of the press, it is an undeniable fact that our Chiefs remain development partners, we are calling on our Nananom not to meddle in our active politics in order for their names and reputations to be questioned. Our chieftaincy remains paramount and sacred and so it must be. Chiefs are at liberty to support whoever they wish to support, our plea is for them to remain as neutral as they can. We feel very unhappy with the use of connival on the person of our Paramount Chief hence appealing to them to stay off if possible in our politics.

Brothers and sisters from the media, we wish to end by assuring the people of Western North region that we shall not relent on our quest to ensuring that we attain the needed development we all fought for.