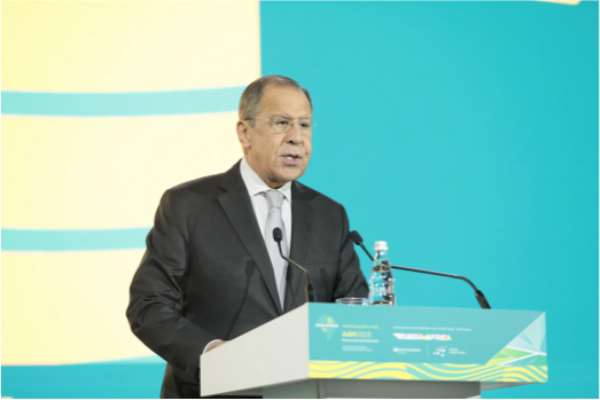 The 2019 Annual Meetings of the African Export-Import Bank (Afreximbank) opened in Moscow yesterday with Sergey Lavrov, Minister of Foreign Affairs of the Russian Federation, saying that Russia’s investment in Africa had increased over the years to reach $20 billion in 2018.

Declaring open the Annual Meetings, Mr. Lavrov said that Russia had made investments in such sectors as mining, energy and railway sectors and highlighting a nuclear power plant and industrial park developed by Russia in Egypt.

“We are moving toward broadening our relationship, especially in our cooperation on security and peace making,” he said, describing Africa as Russia’s important partner in the global struggle for truth and fairness.

Mr. Lavrov said that Russia was committed to promoting Africa with a view to providing African solutions to African problems and urged the international community to provide its support by helping to incentivise and develop programmes that help African businesses.

Gabriel Aduda, Permanent Secretary in the Office of the Secretary to the Government of Nigeria, speaking on behalf of the Chairman of the Annual General Meeting of Shareholders of Afreximbank, commended Russia for hosting the Annual Meetings.

In his comments, Prof. Benedict Oramah, President of Afreximbank, said that 2019 marked a major point for the Bank as it looked to the future of Africa’s trade and finance and sought to build bridges with global powers.

“As we gather in this historic city of Moscow, we will explore how we can shape the future of trade and how we can transform our continent,” said Prof. Oramah. “Our collective endeavours will impact the economic future and wellbeing of Africans for generations to come.”

More than 1,000 African and international trade development experts, representatives of government, business leaders and other trade industry players and officials are taking part in the Annual Meetings, which is also serving as a platform for African and Russian businesses to meet, strengthen and grow partnerships in order to foster business relations.

More than 50 speakers from Africa and beyond are scheduled to speak and address participants during the three days of the conference which ends on 22 June. They will debate and share insights on such topics as, Promoting South-South trade as an engine for multilateralism; prospects for multilateralism in an era of protectionism; and how Africa can make finance work for economic transformation.

Highlights of the event will include the seminar and meeting of the Advisory Group on Trade Finance and Export Development in Africa which will run until Friday; the official opening of the Annual General Meeting of Shareholders in the afternoon on 21 June; and Annual General Meeting of Shareholders on 22 June. The meetings will also feature the launch of the African Trade Report 2019; the launch of the Afreximbank Export Trading Companies Strategy; and a half-day programme of activities dedicated to Russia–Africa investment cooperation. A number of trade agreements are also expected to be signed before the event concludes on Saturday.

The 2019 Meetings mark the second time they are taking place outside Africa. The 2012 Annual Meetings was held in Beijing.