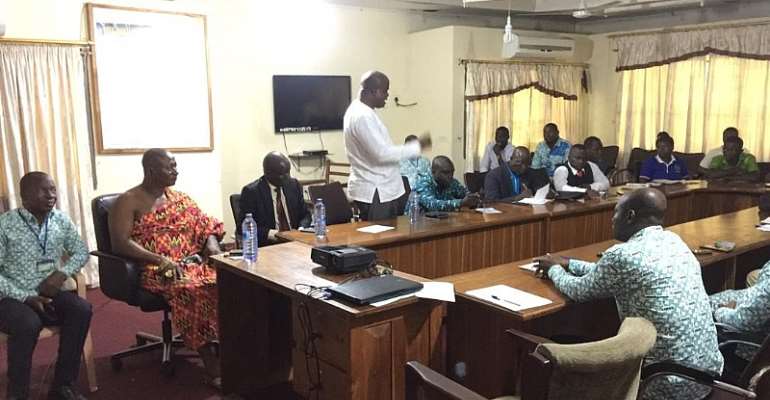 MR. MENSAH (STANDING) MAKING A POINT AT THE MEETING

The Atebubu-Amantin Municipal office of the National Health Insurance Authority has held a day’s review meeting with stakeholders in Atebubu.

According to the municipal manager of the scheme Mr. Kwesi Alhassan, the meeting which covered the entire 2018 and the first quarter of this year was aimed at looking at the progress made over the period, challenges facing the scheme as well as chart a way forward for success adding that the scheme has come to stay.

The Brong Ahafo regional manager of the authority, Mr. Joseph Mensah advised service providers to approach his outfit with their problems for the necessary assistance rather than resorting to radio adding that failure to renew certificates and late submission of claims among others could lead to delays in payments.

Giving a background to the debt situation, Mr. Mensah said on his assumption of office in 2017, the whole of 2016 as well as the first 4 months of that year were in arrears adding that all that debt stock has been cleared with the last payments covering July and August of last 2018.

He said the authority is working around the clock to ensure that the backlog is reduced.

While extolling the ease with which the mobile membership renewal system has brought to both clients and the authority, he urged service providers not to take unauthorized monies from people who visit their facilities.

The regional manager praised the Atebubu traditional council and the municipal assembly for ensuring that the authority has a new office building.

The claims officer at the municipal office of the authority, Mr. Sampson Adu took the gathering through the membership registration targets for last year and what was achieved as well as a comparism between the first quarters of this and last year.

He also touched on the financial performance of the scheme in terms of targets and achievement over the period as well as the steps involved in claims management.

Mr. Adu spoke about factors affecting the average healthcare cost of service providers and the causes of reductions or rejection of claims submitted to his office for payment.

An old and weak vehicle, insufficient claims staff, delays in claims submission on the part of service providers and inadequate BMS equipment were identified as challenges facing the scheme in the municipality.

Participants made varied suggestions towards the smooth running of the scheme in the municipality key amongst which was the need to get an accredited pharmacy to make for easy access to drugs.

Stakeholders were drawn from the Ghana Health Service, private service providers, Ghana Education Service, the Department of Social Welfare and Community Development, the National Commission for Civic Education and the Information Services Department,

Others were the Local Council of Churches, a representative from the Muslim community and the media.

The meeting was chaired by the Twafohene of the Atebubu traditional area Nana Nana Ofori Yeboah.