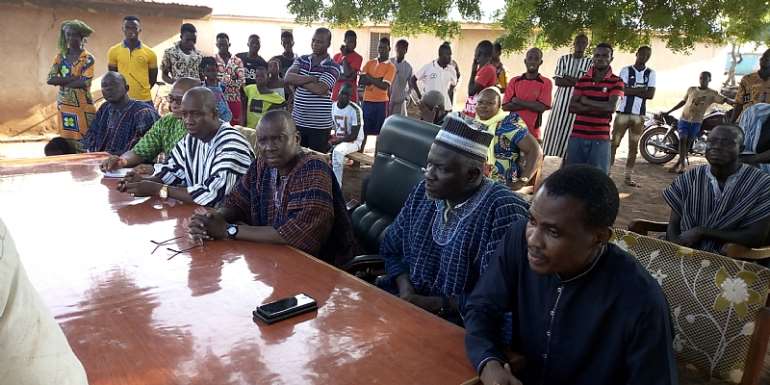 The Minister of the Savannah Region Hon Adam Braimah Salifu has embarked on a familiarisation tour to the Kusawgu and Tuluwe Traditional areas in the Central Gonja District of the Savanna region yesterday Thursday 20th June, 2019.

At Kusawgu, the minister and his team paid a courtesy call on the Paramount Chief of the Kusawgu Traditional Area Kusawguwura Sulemana Samuel Kunkarga I.

Kusawguwra Kunkarga thanked the minister and his entourage for visiting him and appealed to him to ensure peace and unity in the region.

Kusawguwura further spoke about the road connecting Kusawgu and Tuluwe which is in a very deplorable condition making commuting horrible.

He said the minister should ensure the construction of the road and also facilitate the completion of the electricity extension project to Tuluwe and other communities in the traditional area.

He further appealed to the minister to ensure his community gets portable drinking water and a Senior High School in Kusawgu.

The minister in his response to Kusawguwura assured him that he will ensure the various concerns are addressed.

He said Feeder Roads are in the new region and will make sure the road network is looked into.

He said there is a road network linking Bunjai in the Salaga North district to Kusawgu which will be worked on anytime soon.

At the Tuluwewura's palace in the Tuluwe Traditional Area, Tuluwewura Rashid Sulemana Mahama Bunyanso also appealed to the minister to ensure the completion of the road since his community is cut off especially during raining season as a result of a collapsed bridge.

He further spoke about the need for the construction of a police station in the area since there is high rate of armed robbery in the area.

He said he has fully funded the moulding of blocks for that project which he needs support from the DCE of the area to ensure the project is fully executed.

He lamented the high rate of snake bites in his area especially during this season.

He therefore urged the minister to help them get a modern health center since that is a major challenge to them.

Tuluwewura again said it is difficult to make phone calls in the area since mobile network is another problem facing the community.

The Minister on his part said he will make sure the Tuluwe road is worked on especially now that he has first hand information about the nature of the road.

He again promised to tackle the various issues raised by the chief and pleaded with them to ensure peace and unity in the area.

Accompanying the minister was the Co-ordinating Director of the Savannah Region Mr Mohammed Baba and other members staff of the Regional Coordinating Council (RCC).

Earlier two days ago, the Savannah Regional Minister and his team were at Busunu and Larabanga all in the West Gonja District.