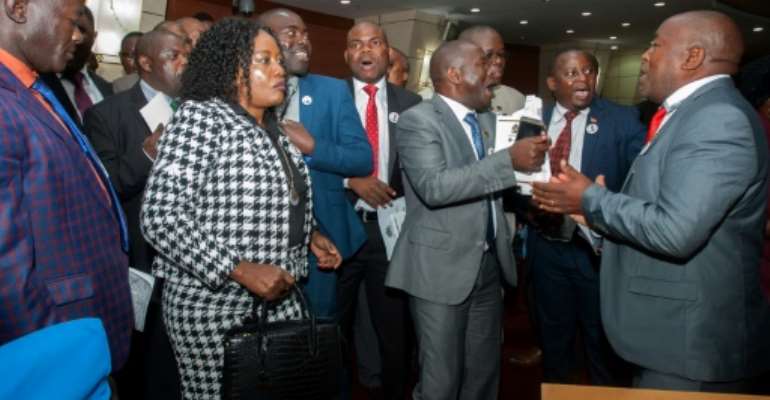 Malawi opposition members sang and danced as they sought to prevent President Peter Mutharika from delivering his state of the nation address.. By AMOS GUMULIRA (AFP)

President Peter Mutharika, who narrowly won the election last month, had applied to have the court application by two opposition parties thrown out.

But the court in Lilongwe, which did not allow press access, said the case could continue and set June 26 as the date for a full hearing.

"We are very happy with the ruling and we will be proceeding with the case," Lazarus Chakwera, leader of the Malawi Congress Party (MCP) main opposition party, said outside the court as scores of supporters celebrated.

"They have been given leave to appeal, but that will not stop the process," he added.

Police used tear gas earlier Friday to disperse opposition supporters gathered at the scene, in the latest of a series of clashes since the May 21 election.

On Thursday, the largest protests since polling day saw thousands march in the country's three major cities to protest against alleged election fraud.

Chakwera alleges he was robbed of victory in the election, which he lost by 159,000 votes.

After the result was announced, he described the election as "daylight robbery."

Mutharika, leader of the ruling Democratic Progressive Party (DPP), won the presidential poll with 38.57 percent of the vote, against Chakwera on 35.41 percent.

Saulos Chilima, who fell out badly with Mutharika while serving as his vice-president, led the new United Transformation Movement (UTM) into third place. The party has joined the MCP's legal battle.

On Friday, opposition lawmakers walked out of parliament in protest before Mutharika delivered his state-of-the-nation address.

"We don't recognise him as president of this country because we don't accept the results that were announced by the Malawi Electoral Commission," Eisenhower Mkaka, MCP lawmaker and party spokesman, said.

In his speech, Mutharika accused opposition leaders of trying to use "mercenary militias" to stir up anarchy in the country.

Earlier in the week, protestors blocked the main route into Lilongwe as the president arrived from Blantyre, forcing him to use another road.

The EU election observer team has said there were many mistakes made in the tallying process but little evidence of tampering.