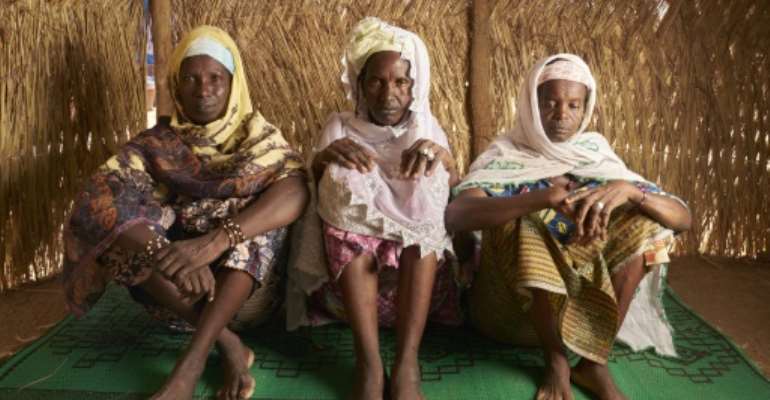 Vellara Barry, 45, Dienaba Barry 43, and Fatoumata Ousmane Barry 45, pictured in May after taking refuge in a displaced persons camp in Bamako amid a spate of violent attacks which have killed dozens. By MICHELE CATTANI (AFP/File)

Thousands of Malians demonstrated in Bamako Friday to demand an end to a series of massacres in the centre of the country.

Police said 3,000 attended the rally in the capital while organisers said 5,000 turned out to urge an end to a spike in violence which has led UN peacekeepers to declare a state of alert.

Ethnic tensions in the centre of the country have surged since a jihadist group led by preacher Amadou Koufa emerged in 2015.

The group recruit mainly from among the Fulani -- primarily cattle breeders and traders -- and they have clashed with the Dogon and Bambara -- traditionally sedentary farmers who have formed their own self-defence militias.

There has been a swathe of mass killings this year. New Year's Day saw 39 Fulani butchered in Koulogon, a village in the central Mopti region while 160 more were slaughtered on March 23 in Ogossagou then 35 more on June 9 in Sobane Da.

Fresh ethnic violence erupted this week leading to 41 further deaths in the ethnic Dogo villages of Gangafani and Yoro -- the latest in a cycle of tit-for-tat attacks between the warring communities despite the army sending in troops.

President Ibrahim Boubacar Keita, who rejects the idea of an "inter-ethnic conflict," on Thursday named former interim president Dioncounda Traore as high representative for the region to report back to him.

The Red Cross, meanwhile, said Friday that some 2,800 people fleeing the violence had taken refuge in the town of Bandiagara in the east of Mopti region where aid including utensils and bedding had been distributed.

He said five men blindfolded Dembele and took him across the border.

Friday's demonstration was organised by a youth association demanding that militia be disarmed and for people to "say no to hate" whatever their ethnicity.

"Too much blood has been spilled. It has to stop or there will be no life left in the centre of Mali," said one demonstrator, Habitatou Diallo.

UN peacekeeping chief in Mali Jean-Pierre Lacroix, visiting Mali on Friday, said in a statement "the situation has reached what one could call an alert level with the dreadful massacres of the past few weeks and days.

"We are ready to increase our efforts to support Malian efforts" to stem the unrest, he added, while stressing that "there has to be a Malian solution."

The UN Security Council is due to examine next Thursday whether to extend the UN mission (MINUSMA) in Mali.