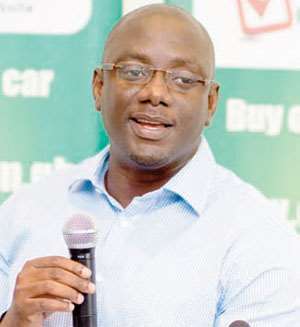 Eric Amoako Twum, a former Deputy Chief Executive of Ghana Export Promotion Authority ( GEPA) has been cited for 'stealing' a laptop after he was fired off similar corruption-related issues.

Eric Twum and another identified as Akilu Sayibu are alleged to have taken away official laptop each worth GHS16, 450 for their personal use.

The audit report which is currently before Parliament and sighted by Moderghana, GEPA was forced to purchased new laptops for replacements after the two former officials refused to return the MacBook Pro.

Aside the laptops, Eric Twum and Sayibu have been cited for unearned clothing allowance of GHS 23, 562.00 despite been fired in June 2018, an allowance they took upto December 2018.

“Our review disclosed that the Authority, in May 2017 procured three Apple Laptop computers (MacBook Pro) at a total cost of GHS24,675.00 for the official use of the former ES, Hon. Gifty Klenam and her two Deputies, Messrs. Eric Amoako Twum and Akilu Sayibu Authority. We, however, noted that the officers took along the laptops when they were relieved of their posts in June 2018.

“Hon. Klenam returned her laptop at the instance of the audit inspection team. Messrs Amoako Twum and Akilu Sayibu have not returned their official laptops, costing GHS16,450 at the close of our audit,” the audit report said.

The Report further revealed, “The situation has denied the current deputy ESs use of the laptops resulting in the procurement of new computer equipment for their use. The practice could lead to official assets being taken over by other separating officers for private use without a trace.”

According to the Audit Report, “When contacted the former officers indicated that the laptops contained some personal information and therefore will either buy new laptops for the Authority or will pay for their cost.

“We recommended that Messrs Amoako Twum and Akilu Sayibu return or replace their respective laptops to the Authority without further delay.”

The duo action, per the Audit Report breached "Regulation 1 of the FAR, 2004 (L.I.1802) which requires that where a public officer is proceeding on transfer, leave or is for any other reason being relieved of the duties under sub-regulation (1), the officer shall hand over the financial, accounting records and assets to the person taking over from the officer.”

“We attributed the cause of this anomaly to disregard for the above-quoted regulation as well as the officers’ seeming notion that the laptops were allocated to them as personal properties,” the report noted.

In addition to that, the report said Eric Twum alone was wrongly paid GHS54,340.00, for furnishing even though he was paid an advance of two years period of US$60,000.00 for fully furnished accommodation.

The Audit Report concluded that " we recommended that the former Deputy chief executive Mr Eric Amoako Twum should refund the amount of GHS54,340.00 which was inappropriately paid to him, or be discharged in accordance with applicable statutory provisions."