Iranians “proud but concerned” after army downing of US drone 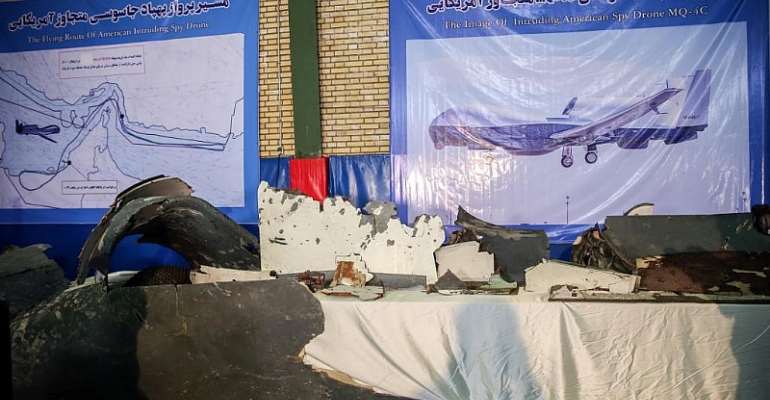 Some of the world's leading carriers, including Air France-KLM, British Airways, Lufthansa, Qantas and Singapore Airlines, have today suspended flights over the Strait of Hormuz, as Iran-US tensions flare over the downing of a drone.

The incident has seen tensions rise further after an earlier series of attacks on oil-tankers the US has blamed on Iran.

“It is quite serious,” America specialist Foad Izadi, at Tehran University told RFI.

“We have been saying for a number of months that the US government is moving towards a military confrontation with Iran. And Iran is fully capable of defending its territory if Iran is attacked by the US.

“I think what we saw with the downing of this drone, it shows that Iran's military capabilities are quite extensive. They managed to shoot down the most sophisticated drone that the US could produce, worth about 200 million dollars."

But there's also concern. “You have someone like President Trump sitting in the White House. And someone like John Bolton, who had called for a military attack on Iran, who is National Security Advisor.

“The US has attacked and invaded two of Iran's neighbors, Afghanistan and Iraq. They certainly don't have any ethical limitations organising and conducting another military attack on a country in the Middle East.

“But the country is safe for now,” he says.
"Not a proportionate response"
Meanwhile, President Trump says he aborted a command to destroy “three sites" inside Iran in retaliation.

He said he took the decision after a general informed him that the planned attack could have resulted in 150 deaths. The American president concluded that this would not be a “proportionate response” to the downing of an unmanned drone.

The US claims that its drone flew in international airspace, while Iran says it “has proof” that the aircraft crossed into Iranian territory.

Meanwhile, Reuters news agency reports that it was told by Iranian officials on Friday that “Tehran had received a message from US President Donald Trump through Oman overnight warning that a US attack on Iran was imminent.

“In his message, Trump said he was against any war with Iran and wanted to talk to Tehran about various issues ... he gave a short period of time to get our response but Iran's immediate response was that it is up to Supreme Leader Ayatollah Ali Khamenei to decide about this issue,” the agency reports.

"Today the countdown to pass the 300 kilogrammes reserve of enriched uranium has started and in 10 days time... we will pass this limit," Iran's atomic energy organisation spokesman Behrouz Kamalvandi said at a press conference broadcast live.

"This is based on the Articles 26 and 36 of the nuclear deal, and will be reversed once other parties live up to their commitments," he added, speaking from the Arak nuclear plant south-west of Tehran.

On 8 May, President Hassan Rouhani announced that Iran would stop observing restrictions on its stocks of enriched uranium and heavy water agreed under the 2015 nuclear deal.

He said the move was in retaliation for the unilateral US withdrawal from the accord a year earlier, which saw Washington reimpose tough economic sanctions on Tehran.