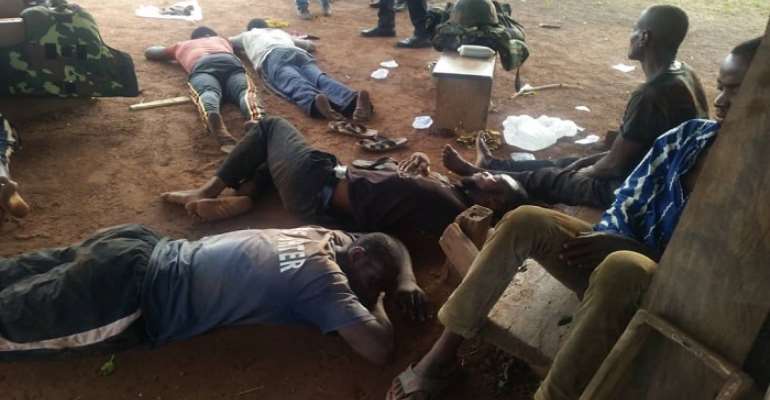 Two ethnic groups in Keri, a farming community in the Nkwanta South District of the Oti Region have clashed over the performing of ritual rites to herald their yam festival for this year.

The groups from Akyode and the Challa who live side by side with a road separating them in the town starting fighting each other on June 17, 2019.

The situation led to schools closing down and some properties destroyed but the security agencies have since intervened to restore calm.

In the ensuing melee, three persons reportedly sustained cutlass wounds and the police/military officers were able to arrest 20 people including the injured.

A reporter based in Nkwanta South said the two groups had agreed to celebrate this year's yam festival together and had decide to do all activities including rituals together in order to avoid a similar clash last year.

However, the Challas allegedly decided to go and perform the rituals for the festival last Monday instead of the agreement to do it at the same time.

The Akyodes on whose land the shrine for the rituals is believed to be situated decided to stop the Challas from performing the rituals.

This led to a disagreement between them which later degenerated into a violent clash.

Reports say both sides were wielding offensive weapons like guns and cutlasses and the police/military team sent there had to disarm the feuding factions.

A lot of the youth after the security officers entered the town have also fled, making the place a ghost town according to reports.

The Public Relations Officer of the Volta Regional Police Command, Prince Dogbatse confirmed the incident to Daily Guide and said the “situation is under control and calm has returned to the area.”

He added that three injured suspects have been cautioned and granted police enquiry bail to seek medical attention.