Dealing With Neighbour's Bad Kid: What Would You Do, Be A Spectator Or Deal With It? 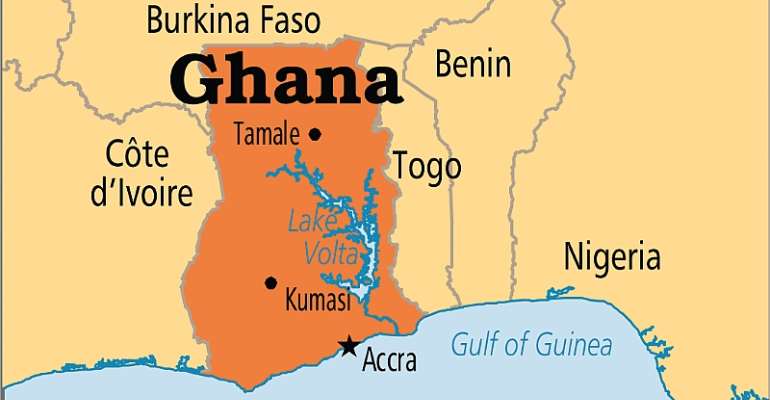 Generally speaking, nobody likes crime, except the criminal(s) or perpetrators of crime.

Who likes to be robbed at knife or gunpoint?
Who likes to throw her security to the dogs or be hijacked by a bunch of idiots?

Who would want her child or loved one kidnapped? Which nation would say to her enemy or adversary-- hey come and destabilise my country or create insecurity, fear and panic?

Absolutely, nobody...Not even the weakling, would surrender or throw her hands up in the air. Hard to believe, even the criminal doesn't want his ill-gotten wealth or property stolen from him. He'll fight tooth and nail to protect them.

BUT how does one do it in order not to harm the good apples and also ensure, the bad ones are not roughed up but follow due process so to speak? How does one avoid xenophobic attacks and hate crime?

That's Ghana you saw in the picture above.
She currently has a huge problem in her hand. She's good and rotten apples mixed together in one huge basket.

Africa's most populous nation-- Nigeria is her neighbour. Between them are two tiny francophone or French-speaking countries-- Benin and Togo.The two nations are endowed with both human and natural resources. Two nations dwarfed by corruption, bad leadership, and bad governments. Two nations with huge youth unemployment. Obviously, driving the energetic guys and gals to seek greener pastures elsewhere in Europe, Asia, Oceania, the Middle East and the Americas. In a nutshell, they're two nations bedevilled with a thousand problems.

So what makes Ghana a preferred destination to her west-African neighbours, especially Nigeria?

Between the two nations, I should say, Ghana has advantage over Nigeria.Don't squint, I'm not making up this one.

Mr. Oladele Adebayo--a Nigerian wrote on his Facebook wall: "Some years back, I joined a research team tasked with comparative analysis of eleven of the world economies, including that of three west African sub-regions."

Mr. Adebayo continued: "Ghana as a country has some similarities with some other performing economies of Europe and America. The World Bank in its annual report on governance entitled: "Good Governance 2007" Ghana was ranked No. 1."

Another Nigerian, Mallam Bolaji Abdullah-- Nigeria minister in charge of youth & development had revealed that Nigerian parents spend over N300bn (which translates to about US$1bn as against US$751million for all Nigerian universities) annually in Ghana over children education. In part that explains why Ghana is attracting her neighbours from continental Africa.

There are an estimated seven million Nigerians currently resident in Ghana. This doesn't include undocumented Nigeria nationals that troop in on a daily basis through our porous borders.

That in itself presents a humongous problem for Ghana. Mind you, it's a problem that's not going to go away today. It looks so convoluted and it requires cool heads, tactfulness as well as enforcement of the laws.

Each nicety becomes more sterile and each withdrawal more permanent."

In the aftermath of the kidnapped and rescued two Canadian ladies about 20 shops owned and operated by Nigerians were locked down by unidentified persons at Suame Magazine in Kumasi. Four Nigerians who reported to be kingpins including their Ghanaian counterparts staged the kidnapping. And following that I read some articles and saw a few videos that had been overstuffed with innuedoes. Some loaded with incendiary remarks. And others riddled with hate speech.In fact, I read one repulsive writeup that primarily sought to appease one group of nationality and demonised the other.

Why?
Is it time to blame or time to jaw jaw and find a lasting solution? I don't think there's a particular ethnic group, or particular government or particular association in Ghana that hates our brothers and sisters from Nigeria. Indeed, I can say there are more Ghanaians that want to see our relations grow better and stronger. I've friends from Nigeria still resident in Ghana. I worked with some and schooled with others. Do I want them deported? No, they're law-abiding and hard working people who want to earn a living and pursue happiness.

Would you tell a police officer to let go an armed robber because he's a Ghanaian?

No, so let's all work together and stamp out crime in the system.If you see something say something. The criminals live in your neighborhoods and homes-- report them to the authorities. That's the way to go.Let's support the police and immigration officers to deal ruthlessly with these goons. The security agencies alone cannot stop this phenomenon. They need our unflinching support.

I know there are other nationalities in Ghana that indulge in criminal activities. But if you always find yourself on the wrong side of the law that means there's something wrong with you.

Remember, a pig will remain a pig, regardless of the makeups or the lipstick she puts on.

It's how you address or say it and the motive behind what you say that matters.

"One day I am going to begin something-- removing criminal alleged immigrants from this country, " President Trump.

So don't blame one government or one ethnic group. Blame the system, which you're part of. People are people and they'll remain as such.

Maybe you didnt know this fact.
President Barack Obama was referred to as:
'Deporter In Chief'. Between 2009 and 2015 his administration deported more than 2.5 million people through immigration orders.

According to immigration records the Obama administration have deported more than the sum of all the presidents of the 20th century. Does that mean he hates immigrants?

By their fruits we shall know them.
Deportations
Talking about deportations, in 1969 Ghana deported at least 100, 000 foreigners most of them Nigerians. What happened a decade later? Nigeria retaliated. She repatriated close to 1.2 million Ghanaians in the 1980s.

The Alarm Bell
Behind every successful Nigerian criminal in Ghana there seems to be a Ghanaian as an accomplice. That's how it works. But beyond that this growing problem as I've already pointed out is being driven by bad leadership, teeming unemployed youth, among others, including the crave to-get-rich-quick (419 as it's known in Nigeria and Sakawa in Ghana).

Does anybody remember this?
On the morning of Friday 5 January, 2018 a man said he received a-three-minute 48 seconds audio from a brother that alleged that trouble was brewing at Ofankor a suburb of Accra in the Greater Accra region.

The incident involved two guys--a Ghanaian and Nigerian. According to him the two were arguing over a woman and it appeared the incident ended tragically, as the Ghanaian was stabbed in the process by the Nigerian.

That law-abiding man rang the alarm bell.
That man was a Nigerian. Something spooky was shaping up and he feared it could escalate if authorities failed to tackle it immediately.

The Nigerian also made a passionate appeal via social media to the Ghana Immigration Service (GIS) to do something about the influx of Nigerians to Ghana, especially those coming through the Aflao border from neighbouring Togo. The eastern corridor has become a hotbed for nocturnal activities.

Is this guy just snitching his fellow Nigerians?
Or he’s giving the Ghanaian authorities a heads up for a potential danger?

And he was very uncharitable with/about his words to his kinsmen.

“I’m so disgusted and I’m tired of this nonsense. Must you be in Ghana?” he quizzed. I’m a Nigerian... I’ve invested here…I’ve a family, I came here to live. If you’re an idiot, if you’re cursed then go back to Nigeria and die there. Your country is being held by a political thread….we don’t even know what’s going to happen. And you’re here in Ghana you won’t comport yourselves and behave yourself properly like a human being. You come to another man’s country –you’re stabbing him and drugging his woman. You’re breaking bottle. Are you mad?"

Are Nigerians pushing Ghanaians to the wall?
Maybe Ghanaians themselves haven’t realised that. Maybe they still have enough of their well-known patience and tolerance saved at the bank. Maybe the cases of abuse, harassment and knifing aren’t widespread. Or maybe just maybe the host nation wants Nigerians themselves to tell their own story so that when the untoward erupts tomorrow (God forbid) the blame would go squarely to them.

I think the concerned Nigerian has said it eloquently, this wanton attacks, kidnappings, armed robberies by Nigerians, other foreign nationals including Ghanaians, if not controlled has the potential to cause or spark xenophobic attacks across the country.

And I think that’s where we find ourselves now who’s coming in and going where?

Border patrols must be keen and rapid since we may not have full proof records of ECOWAS citizens visiting from sister nations. I think member states must be privy to ones criminal record .who is traveling to where and as what -- a tourist, an entrepreneur or businessman, a student etc..?

That said I now understand why ECOWAS citizens have some limitations to their right as enshrined in the free movement of Protocol. That perhaps suggests that the Community doesn’t have the teeth or resources to police its permeable borders.