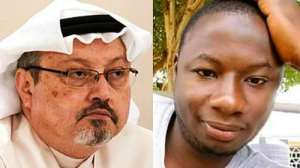 World leaders and most powerful people are no longer ashamed to lie or commit clandestine crimes. They have come to the point of claiming lies with pride because without lies, your world will be full of enemies and without lies, you can’t be ‘successful’ in every position you occupy.

The world in the hands of an empire of corruptible deceitful leaders, influenced by power and money, they have declared war on the truth, making sure to kill anyone, including journalists, that come their way, to cover up their devilish schemes and build consensus.

It’s not an exaggeration that journalism is now a dangerous profession. Journalists don’t carry a gun, just a mere pen, yet they are the most feared people in society by corruptible politicians and criminals because they consider journalists as a threat.

Many hate journalists to the extent that in the year 2018, 80 of them were killed in different places worldwide, 15 registered in Afghanistan, 11 in Syria, 9 in Mexico, 8 in Yemen and six in India.

The killing of Saudi journalist and dissident Jamal Khashoggi reveals how money rules and commits crimes in this world with impunity.

On November 15, the Saudi Arabia prosecutor's office indicted 11 people for the murder of journalist Khashoggi, believed to be authorized by the Saudi royal family.

Khashoggi, a contributor to the Washington Post had gone to the consulate to collect some documents but never came out from the place alive. His girlfriend reported his disappearance, after waiting for him outside the building for eleven hours, until the offices closed.

Khashoggi had advised her to notify an adviser to the Turkish president, Recep Tayyip Erdogan, if he did not come back. At the entrance to the consulate, the journalist had been forced to leave his cell phone.

Who is Jamal Khashoggi

A former adviser to the Saudi government, Khashoggi decided to exile himself in the United States in 2017, for fear of a possible arrest, after criticizing some decisions of the Saudi crown prince, as well as Defense Minister Mohammed bin Salman.

The journalist had also expressed several criticisms of Riyadh's military intervention in Yemen. Khashoggi had repeatedly reported intimidation, arrests, and attacks on journalists, intellectuals and religious leaders not aligned with the Saudi royal house.

Since Khashoggi has refused to enter Saudi Arabia, his assassination was plotted at the Saudi Consulate in Turkey.

The Killing Of the Ghanaian Journalist, Ahmed Hussein-Suale

In my beloved Ghana, Ahmed Hussein-Suale, a journalist who used to be one of the investigators at Tiger Eye, a private investigative team, financed by Anas Aremeyaw Anas, a Ghanaian investigative journalist, on January 16, 2019, in the neighbourhood of Accra, was brutally assassinated by unknown assailants. Why was this journalist killed?

Ahmed Hussein-Suale and his boss Anas Aremeyaw Anas, have been investigating massive corruptions in Ghana, involving high Ghanaian government officials. An example of such a corruption scandal is Ghana’s football, involving Kwesi Nyantakyi, resulting in his ban from the sport for life.

Many know Ghana for two important reasons, firstly, gained independence in 1957, with Kwame Nkrumah as the first leader and secondly, it's a peaceful country but what many don't know is that Ghana is one of the most corruptible countries in Africa, which nothing works in the country, including its judiciary system.

The senseless killing of the journalist, other killings and kidnappings, now adds Ghana's name to the list of a possibly dangerous and truth suppressing country. After a long silence of Mr. Hussein-Suale's death, the Ghana media reported the suspected killer's arrest.

Like many lawless countries around the world, money is the compromise of truth in Ghana. Without the dollar, you can't get the justice you deserve. Many Ghanaians wake up without hope and means because the political atmosphere in the country is not for the common people.

I believe Ghanaians wouldn't have cared about the NPP or NDC if the people have jobs, the economy is flexible and prices of commodities are moderate. Why? Because throughout Europe, the majority don't care about political parties in power since the economy is good and everyone lives well.

It's hard to understand the closure of radio stations in a country which claims the following of democracy. This is another form of suppressing information or restricting the activities of journalists in any advanced country.

Trump has called many media fake, yet he knows it's against the principles of democracy to shut down television or radio station. If the media goes against the law, they can be fined or penalized but shutting down a media house or station is only experienced in a dictatorship of government.

I can understand the efforts of the government in a country which was in the hands of the opposition party for many years but many are disappointed the fact Nana Akufo Addo appointed an unfamiliar large number of ministers, in Ghana's political history, hoping that will ease their suffering in time.

Even though many journalists have been killed around the world, including Ghana, no one can stop journalists from active service. They can be killed but no one can kill the truth. The truth will always be there to stare directly into your eyes forever.