By Patrick Fort in Abidjan with Fabien Zamora in Paris 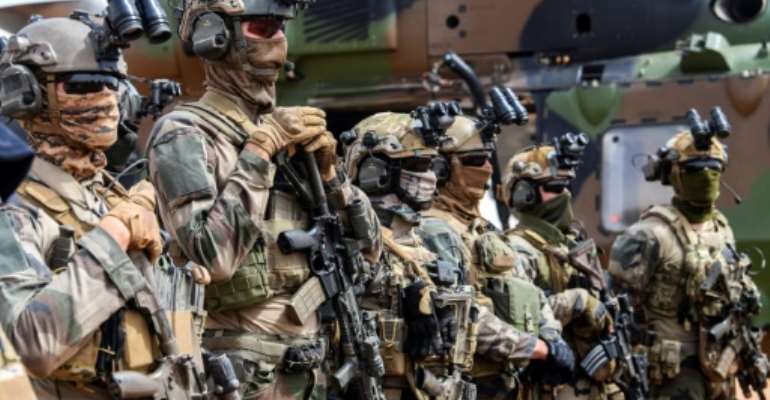 France has deployed 4,500 troops in the region. By Alain JOCARD (AFP/File)

The Sahel region has become a haven for jihadist groups, who are now carrying out attacks almost daily in the vast, fragile region despite a fightback by international and local armies.

The latest strikes included Tuesday's raid in northern Burkina Faso, which killed 17, and another at the gates of the Niger capital Niamey that claimed the lives of two policemen.

Eighteen members of the Islamic State in the Greater Sahara were meanwhile killed in a joint operation by US, French and Niger troops near Niger's border with Mali, Niger's defence ministry announced on Tuesday.

The June 8-18 operation took place in the northern border region of Tongo Tongo and targeted a group "implicated in an ambush on May 14," in which 28 Nigerien soldiers were killed," it said.

The volatile western rim of the southern Sahara includes conflict-ravaged Mali as well as Mauritania and Chad, which have become hunting grounds for a range of armed militia including some linked to the Islamic State (IS) group.

"It's Sisyphean, it never stops!" said a French security source, referring to the figure in Greek mythology whose name signifies endless labour and frustration.

Sisyphus was punished for eternity by being forced to roll a boulder to the top of a hill, only to see the rock roll down again once it neared the peak.

Further complicating matters are the Boko Haram fighters from Nigeria who have now extended their attacks to neighbouring countries in a decade-long campaign of violence that has killed 27,000 people in Nigeria alone.

There are 13,000 soldiers in a UN peacekeeping force in Mali, while France -- the former colonial ruler of several western Sahel countries -- has deployed 4,500 troops to Mali, Burkina Faso, Niger and Chad in a mission codenamed Barkhane to help local forces flush out jihadists.

However, their impact seems so far to be meagre.

Burkina President Roch Marc Christian Kabore on Thursday called for "more concerted action" against the jihadists and said the countries "must overcome our differences and individual interests."

A security expert said that despite repeated operations (the jihadists) still have this ability to strike regularly.

"Every month there are fairly complex attacks, improvised explosive devices are planted... giving the impression that the insurrection is growing slowly but surely," the expert said.

"The number of incidents and victims are not reducing, rather it's the opposite."

One problem facing the international forces was that they were "reactive", said Jean-Marc Balencie, an Africa expert at French consultancy firm Risk&Co.

"One can assume that the Islamic State in the Greater Sahara (present in Mali, Niger and Burkina Faso) has suffered some serious blows, lost chiefs, been in a state of withdrawal and yet they have successfully pulled off several spectacular operations in recent weeks," he said.

"A real area of concern is the capacity of resilience and recovery from losses."

"They just melt into the population," he said, and then stage "sporadic attacks."

"The foreign armies face a problem of intelligence. For the time being, the locals seem more inclined to provide information to armed groups than to local armies," he added.

Foreign soldiers often face suspicion and anger from people who view their presence as a loss of sovereignty.

At the end of May, around 1,000 people gathered in the Niger capital shouting "Down with foreign military bases!" and "Down with the French army!"

Some see the presence of foreign troops as a loss of sovereignty. By BOUREIMA HAMA (AFP/File)

Jihadist violence was largely unknown in Burkina Faso before 2015 and some claim that the arrival of the French Barkhane troops fuelled Islamist attacks.

"I personally think if France had not intervened in Mali in 2013 (when a rapid response from French military prevented Islamist groups from storming Bamako), there wouldn't be a Malian state, so that was a good thing. But since then, the situation hasn't really improved," Burkinabe Defence Minister Cheriff Sy said in a recent interview.

"They've got maybe 4,000 men in the region, they have all the military and technological resources, so I'm surprised they haven't been able to eradicate this band of terrorists... If they really wanted to, they could have beaten them, so do they have another agenda?"