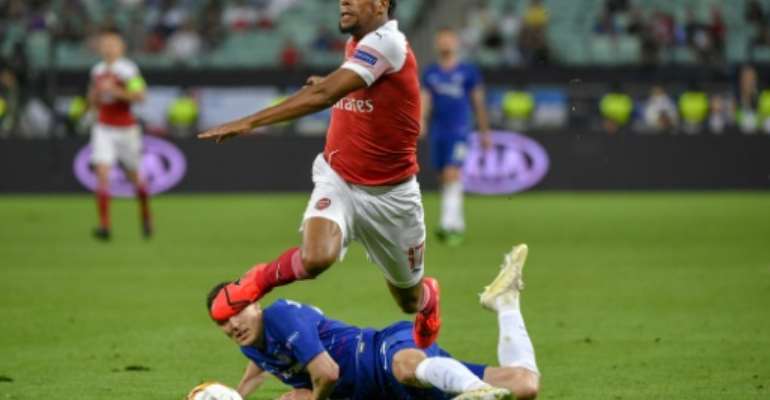 Nigeria coach Gernot Rohr is banking on Arsenal forward Alex Iwobi for goals when they face debutants Burundi on Saturday in the Africa Cup of Nations Group B opener in Egypt.

"Although only 23, Alex is an experienced international and I want to see him scoring more regularly for the national team," said German Rohr.

"He, Odion (Ighalo) and Ahmed (Musa) can cause a lot of damage to opposition defences if they click at this Cup of Nations."

Rohr has cause for concern as Nigeria failed to score in two warm-up matches against fellow qualifiers, drawing 0-0 at home to Zimbabwe and losing 1-0 to Senegal in Egypt.

But a favourable draw -- Guinea and Madagascar complete Group B -- should ensure Nigeria top the standings and book a last-16 place.

Here, AFP previews the three Saturday matches with Guinea playing Madagascar in the other Group B fixture and the Democratic Republic of Congo and Uganda squaring off in Group A.

Nigeria are the fourth highest ranked team in Egypt and Burundi the lowest with 89 places separating them in the world rankings.

But Rohr became upset the second a reporter described this match in the coastal city of Alexandria as one the three-time champions should win comfortably.

"The national football association president (Amaju Pinnick) says we must win this tournament, but we have a very young side."

However, the coach can call on three of the 2013 Africa Cup-winning squad, captain John Obi Mikel, Kenneth Omeruo and Musa, to provide experience.

Ranked among the no-hopers, Burundi have impressed in preparatory matches against former champions, holding Algeria and losing in stoppage time to Tunisia.

Both experienced Cup of Nations campaigners Guinea and newcomers Madagascar will aim to brush aside poor warm-up form and launch their campaign with maximum points in Alexandria.

Guinea lost to the Gambia, Benin and Egypt while Madagascar drew with Luxembourg after conceding two stoppage-time goals before failing against Kenya and Mauritania.

The Guineans hope Liverpool midfielder Naby Keita can play after injuring a thigh in the Champions League semi-final against Barcelona.

Keita and his team-mates can draw comfort from having Belgian Paul Put as their coach -- he took outsiders Burkina Faso to the 2013 final before losing narrowly against Nigeria.

Madagascar coach Nicolas Dupuis -- one of seven from France at the tournament -- has worked wonders to get the Indian Ocean island state to the finals, but further progress is unlikely.

Democratic Republic of Congo captain and Celtic midfielder Youssouf Mulumbu has raised the bar considerably by saying his country can win the competition.

"Provided we can fix a few things, there is no reason why this team cannot go all the way," he said ahead of a Cairo clash with Uganda.

"We reached the semi-finals and the quarter-finals in the last two editions and I believe the team is better now under our great coach Florent (Ibenge)."

With Mohamed Salah-inspired hosts Egypt expected to win Group A, a tight contest is set to unfold between DR Congo, Uganda and Zimbabwe for second place, and a guaranteed last-16 slot.

Uganda coach Sebastien Desabre is less boastful than Mulumbu, saying: "We aim to achieve decent results, especially in our first match against the Congolese."