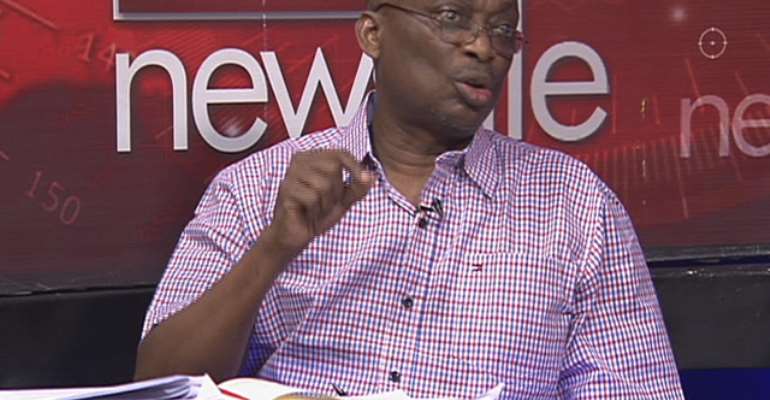 In the said video clip, the Nigerian Professor of English language can be heard vividly inciting his compatriots to attack Ghana using the Nigerian media.

The Professor poured his heart out: “The Nigerian community here has a bad image, but we can take it back through the press, we can reverse. We have powerful media stations, channels that broadcast all over the world”.

“Let them come and look at what we have said here today. Let them come here and run documentaries of the experiences on Nigerians and blast it all over the world. In three days Ghana will respond”.

“You cannot be here and suffering. Let the leaders get our media guys come here and cover what has been happening. Go to the student community go to the business community go to everywhere, come to the embassy. Go and confront the officials with the information and within one week, I can tell you part of what is happening. I’m sorry to say it but this is within us.”

“The present government in Ghana came on the grounds of Nigerian bashing. I have listened to things some of their top leaders have said all over the world in big major places. We did not take it back sir. If we take back they will sit up. So let us use media strategy. You know I have been a press man, there is no absolute truth in the media. Let us use our own media and get back to them”.

“Let us see life cases. We want to go to their prisons to see Nigerians, of course they will turn you back, we then broadcast it to the world.”

In fact, after a carefully considered deliberation on the Nigerian Professor’s statement, I would like to conclude that he was seeking to incite his compatriots to disturb public peace.

Incitement, instigation, abetment, and solicitation are all common to various criminal codes worldwide.

These are generally considered "inchoate offense[s]" or "a step toward[s] the commission of another crime, the step itself being serious enough to merit punishment”.

In the English common law for instance, there are three general inchoate offenses: 1) attempt; 2) conspiracy; and 3) incitement.

“ Incitement conveys a "general label to cover any use of words or other device by which a person is requested, urged, advised, and counselled, tempted, commanded, or otherwise enticed to commit a crime."

Although the right to freedom of opinion and expression stretches to queer and unpopular ideas and statements which “shock, offend or disturb”, a number of human rights treaties, conventions and declarations, including the two of the three instruments comprising the International Bill of Human Rights (International Covenant on Civil and Political Rights and the Universal Declaration of Human Rights), obligate states to prohibit all forms of hate speech.

And more so hate speech – the advocacy of hatred based on nationality, race, tribe or religion – occupies an exceptional position in international law.

It must, however, be noted that free speech does not give the right to individuals to say or write whatever they want, whenever they like, without permitted abridgement.

The fact however remains that freedom of opinion and expression may be subject to restrictions, but these shall only be such as are provided by law and are necessary: “For respect of the rights or reputations of others; for the protection of national security or of public order (order public), or of public health or morals”.

As a matter of fact and record, freedoms are restricted in the public interest on grounds of national security, to preserve public order, to protect public health, to maintain moral standards, to secure due recognition and respect for the rights and freedoms of others or to meet the just requirements of the general welfare of a democratic society.

As a matter of fact, freedom of opinion and expression is not absolute and must of necessity be subject to limitations on the above lines. And more so the right of free speech and expression does not extend to sedition, slander, defamation and obscenity.

But that said, we must not and cannot lose sight of the fact that most wars, crimes and genocides perpetrated against humanity, were arguably expedited through the use of hate speech aimed at securing popular support for illegal and violent action.

In hindsight, we can infer that hate speech could spell doom for a nation. So it is necessary and proper for people who are supposed to know better to stay away from any opprobrious pronouncements that can incite violence.

Strictly stating, freedom of opinion and expression is not an absolute right in national and international jurisprudence. In fact, this right, like others, may be restricted to protect and balance other rights and interests.

However, it is the complexion and the degree of these restrictions that is often contended in extant human rights and security jurisprudence.

It is, therefore, worth stressing that the inherent dignity and equality of every individual is the foundation of freedom, justice and peace in the world. Thus, it is not surprising that international law prohibits statements which deny the equality of all human beings.

Take, for example, Article 20(2) of the ICCPR requires states to prohibit hate speech: “Any advocacy of national, tribe, racial or religious hatred that constitutes incitement to discrimination, hostility or violence shall be prohibited by law”.

Even though some experts contend that restrictions on hate speech can be justified, Article 20(2) has proven highly controversial and is variously criticised as being overly restrictive of free speech or as not going far enough in the categories of hatred it covers.

In so far as Article 20(2) does not obligate states to prohibit all negative statements towards national groups, tribes, races or religions, if a statement “constitutes incitement to discrimination, hostility or violence,” it must be condemned in no uncertain terms”.

However, the prohibition of propaganda is not innately contradictory to the right to freedom of expression.

The right holder, however, has to be cognisant of the duty and obligations which are encapsulated in the international human rights instruments.

Nevertheless, incitement to commit an illegal act is in itself illegal under international law.

To the Nigerian Professor of English language: in as much as you have inalienable rights as a human being to seek, receive and convey information and ideas of all kinds , such rights are subject to permitted abridgement, so please stop misusing such inherent rights.

The author has 914 publications published on Modern Ghana.