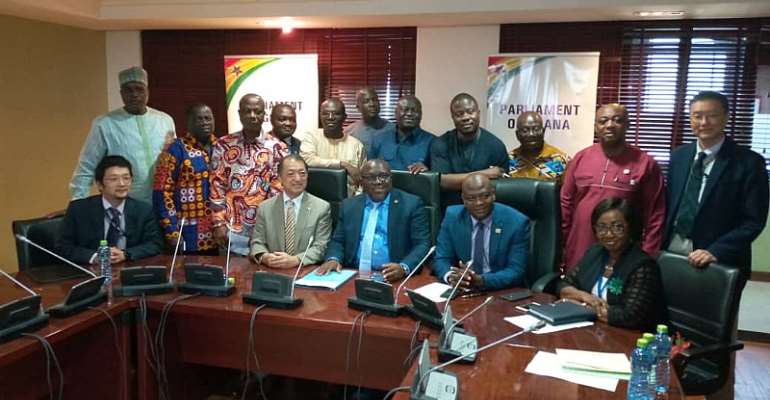 Ghana and Japan bilateral relations remained the most reliable partnership in the West Africa sub-region in terms of development cooperation and exchange of political ideas, the Japanese Ambassador to Ghana has said.

The Japanese Ambassador, H.E. Tsutomu Himeno made this known when he paid a familiarization visit to Ghana's Parliament to interact with Members of the Ghana-Japan Friendship Association on Thursday, June 20, 2019.

While interacting with the Members of the association, Mr Himeno said, though Japan has tied relations with many of the Africa sub-region, Ghana is the only country that the contribution of Japan is recognized and rewarded.

He said the people of Japan have on many occasion expressed appreciation of the results they seen between the two nations, especially the capital investments made in Ghana over the last two decades.

According to him, when it comes to good relations, development cooperation and political and diplomacy, Ghana is doing well with Japan and promised the Embassy would continue to have interactions with members of the association to impoverish on policies and programmes that would inure to the benefit of the two countries.

Mr Himeno cited the Noguchi Memorial Institute for Medical Research (NMIMR ) set up in 1979 in honour of Dr Noguchi, a medical doctor from Japan who came to Ghana to conduct research into medicine to help Ghana fight malaria and other related issues but died just six months later in the country.

For instance, it was Japan that provided a grant for the Cape Coast Yamorasan road in the Central Region and other several projects in Districts and communities across the country with it's national as volunteer services personnel.

Mr Himeno however assured of Japan readiness to support the Ghana Beyond Aid agenda through agricultural services to wind itself from over-reliance on import and also provide technical support in the education sector.

Chairman of the Ghana -Japan Friendship Association, Hon Seth Kwame Acheampong, MP for Mpraeso said Ghana has benefited a lot from Japan and that checks done indicated that Japan is the only country with the highest number of grants granted to Ghana for developmental projects.

Hon Samuel Abdulai Jabayete, MP for Chereponi and Vice Chairman of the association expressed gratitude to Japan for the support given to the country and wish the Embassy give its much attention to agriculture as it formed about 40 per cent of the country employment sector.

He said, Agriculture has evolved beyond the use of cutlasses and the Hoe and is now on machines and mechanized large scale farming, stating that, with the increasing threats by climate change on agriculture, it would be opportunity Japan increase its support to farmers, especially those in the northern Savanna enclave of the country.

Other members including Emmanuel Kwesi Bedzrah, MP for Ho West observed that language penetration between the two counties remained a barrier and called for a collaborative effort to break that barrier.

According to him, the two nations have a lot to benefit from but the language penetration made it difficult, stressing that the Japanese language is not easily learned.