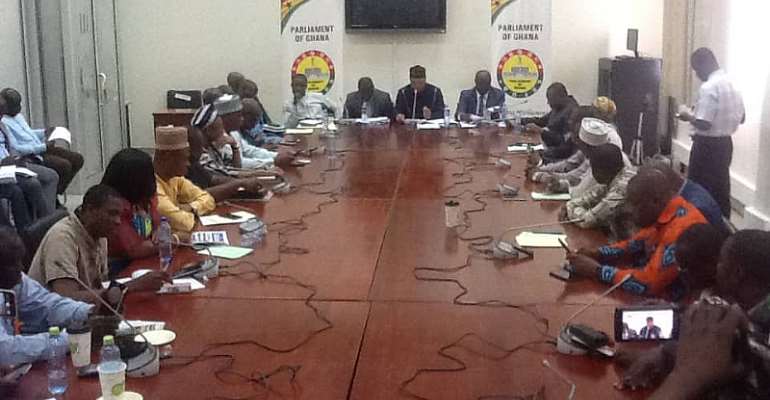 Ghana’s energy sector debt is becoming a political game been played between the Minority National Democratic Congress (NDC) and the ruling New Patriotic Party (NPP) as they accused each other of the ballooning energy debts.

Whilst in Canada, President Akufo-Addo, claimed his government inherited GHc5.2 billion energy debt from the previous administration led by former President John Mahama of which the government paid part of the debt.

But the Minority in Parliament on Thursday, June 20, said President Akufo-Addo, claims were not only false but an attempt to conceal the true state of the energy debt his government incurred.

According to the Minority, President Akufo Addo has failed to sustain what the Mahama government left behind and went on to misuse funds accrued from the energy sector levy putting the debt at an alarming rate.

Ranking Member of Mines and Energy Committee of Parliament, Adams Mutawakilu, who addressed the press blasted President Akufo-Addo for being inconsistent with his claims.

He said the claims by the President that the recent power outages in parts of the country were as results of mismanaged by the previous Mahama-led administration was inaccurate and also an attempt by the President to avoid responsibility for the incompetence he has displayed.

"The President has often made inaccurate claims about the debt in the energy sector in a bid to conceal the true state of affairs. One of these inaccurate claims was his recent visit to Toronto, Canada where he said that “his government inherited a $5.2 billion debt in Ghana’s energy sector from the previous Mahama-led National Democratic Congress (NDC) administration, half of which has been paid, while the remainder hanged on the neck of his administration like an albatross.

"President Akufo-Addo added that “the situations responsible for the constant power outages Ghanaians were forced to endure, were from the previous Mahama-led administration.

"The Minority does not only find these statements as inaccurate but also an attempt by the President to shirk responsibility for the incompetence he has displayed in the management of the country’s energy sector which remains a backbone to the Ghanaian economy," Hon Mutawakilu intimated.

He added that the current government is the luckier government in the history of Ghana for it has inherited an economy already built by the previous NDC government but due to their incompetence they are still be lamenting.

Stating what they said setting the records straight, the Minority said, the Legacy Debt of approximately $2.4 billion is a debt accumulated by successive governments between the years 1992 and 2015, nothing that, $250 million out of the $2.4 billion was paid to Banks by the Mahama-led government in 2016 to ease the liquidity crunch.

As at the end of 2016, the Minority claimed the energy sector debt was approximately $2.2 billion and that the time the President John Dramani Mahama government exited power, the $2.2 billion amount was certified and agreed to be settled within 3 – 5 years starting from 2016, with the passage of Energy Sector Levies Act 2015, Act 899 (ESLA).

The Damongo MP explained that there was a term-sheet of $600 million to pay-off suppliers, but this was delayed by President Akufo-Addo for more than a year.

He pointed out that, the Government rakes-in approximately GHS 3billion ($590 million) annually from the ESLA Fund, saying that, this made President Akufo-Addo inherit "DUMSORLESS” economy in January 2017.

The Minority added that at the end of 2016, almost all the state-owned enterprises (SoEs) in the energy sector reported profits, showing strong sector performance and therefore expressed shocked by the president claims.

They however demanded government and President Akufo Addo to provide further and better particulars on his claim that the NDC handed over a debt of $5.2 Billion in the energy sector.

In addition to that, the government should account to Ghanaians on how the monies raised from the ESLA has been utilized and as well explained to Ghanaians how the government intends to pay the debt owed the utilities to provide the required liquidity in the sector.

The Minority further vowed to expose any attempt by government to deceive Ghanaians in order to cover up their incompetence which has brought untold hardship to poor citizens.

They also warned that any misapplication of the ESLA inflows would be revisited by all means possible under the laws of Ghana when former President Mahama takes over Government on 7th January 2021.