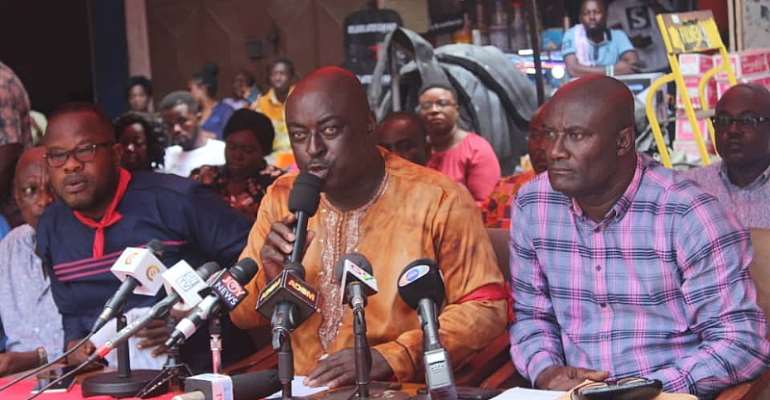 The Abossey Okai Spare Parts Dealers Association has cautioned Akufo-Addo government over the handling of the issue of foreigners invading the retail sector of the country.

According to the Association, should government fail to apply the laws of the country with regards to ensuring that foreigners are excluded from the retail business within the next 14 days, “we will take out destiny into our own hands.'’

The Association's Public Relations Officer (PRO) Francis Anom, speaking at a press conference on Thursday, June 20 in Accra, expressed the group's disappointment in the way and manner government was handling the incidence that occurred at the Suame Magazine in Kumasi.

It would be recalled that a number of Nigerian traders left Suame Magazine on Tuesday after over 50 of their shops were closed down for engaging in retail trade contrary to Ghanaian laws.

This was after a mob went around to forcefully order the closure of the shops operated by Nigerian traders.

The mob also allegedly ransacked two shops belonging to Nigerians and destroyed some items in the process.

The locals burnt lorry tyres and tied red bands as they moved violently to stop the Nigerians from opening their shops.

But Mr. Anom addressing the media noted that it was out of government's failure to enforce the law, GIPC Act 865, section 27 (1) that resulted in the closure of retail shops belonging to foreigners by Ghanaian retailers in Kumasi.

“We are emphasizing that foreigners are not supposed to engage in retail trade per the law stated above and so we are reiterating that all foreigners who are doing business should do wholesale,” he said.

“We affirm our support to our brothers and sisters in Kumasi who have taken it upon themselves to defend the course of freedom and enforce their rights in their business,” he said.

He said the Ministry of Trade and Industry has consistently promised to crack the whip by setting up a taskforce to prevent foreigners from entering the retail business.

However, he lamented that “but this taskforce has not been able to live up to expectations.”

Mr. Anom said the invasion of the retail business by foreigners was costing the country huge revenue as, “their income are repatriated to their countries resulting in the fluctuation of the currencies in our markets.”

The group thus called on government to be bold and enforce the laws which were made to protect Ghanaian retailers.