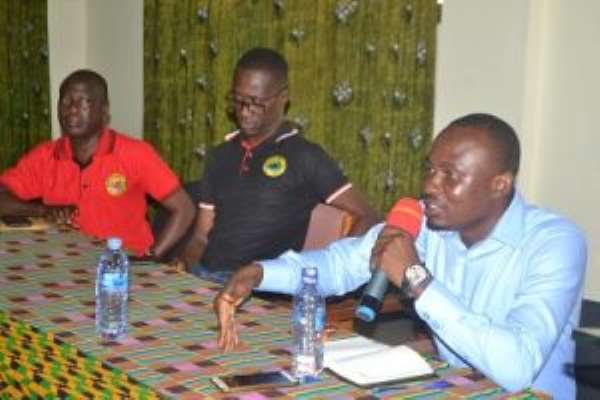 About 200 containers of rosewood from Kalakpa Resource Reserve in Abutia, in the Volta Region, were illegally smuggled out of the country to international markets between January 2018 and January 2019.

A research conducted by the Ghana Wildlife Society (GWS) in collaboration with Kalakpa Youth Club and the Abutia Development Union, all non-governmental organisations, established that despite a nationwide ban on the felling of rosewood since 2014, the illegality had been prevalent in the reserve in the last six years.

There was also alleged evidence of illegal settler communities, onsite sawmill operations, designated unofficial routes, a charcoal production industry, some forestry officials involved in the illegalities among other activities that threatened flora and fauna of the reserve.

At a news conference in Accra yesterday to highlight the extent of destruction in the wildlife protected area acquired by the government some 44 years ago, Director of the Kalakpa Club, Horlali Haligah noted that “the direction of trade of Ghana's rosewood in terms of value mainly pointed to China and India.”

According to him, in spite of the large volumes of rosewood evacuated from the reserve in recent times, there were no records of proceeds coming to the local communities to improve the wellbeing of indigenes in line with the Forestry Commission Act 1999 (Act 571, section 2 a, b).

“We have seen markings that suggest that the illegal loggers have valid timber certificates despite a ban on rosewood which implies that some senior officials may be involved.

Even though the Forestry Commission is supposed to be responsible for the sustainable management of resources in our protected areas, what we see in Kalakpa is a shameful dereliction of this duty. We see no plan to replenish already degraded areas, no plan to remove illegal settlers or farms, no plan to improve the security of the reserve and no plan to promote the reserve to attract tourists,” he lamented.

Mr Haligah asked the Ministry of Lands and Natural Resources to immediately institute measures to address the Kalakpa situation, calling for more efficient ways of regulating and enforcing the ban on rosewood.

Community Resource Management Approach (CREMA) needs to be implemented at Kalapka to engage more local communities in the oversight and management of this nature reserve for posterity,” he urged.

A policy and Advocacy Officer of GWS, Faisal Elias charged the Forestry Commission and the sector ministry to “ensure the ban is made to hold this time” by improving monitoring and surveillance of “protected areas and the plant and animal species in them.”

He implored the government to hasten the passage of the Wildlife Resource Management Bill into law to give legal backing to community participation in forest management.

“Community participation is key in forest management and the involvement of people and communities within the Kalakpa landscape in the management of the reserve must be strengthened to increase its protection,” Mr Elias maintained.

Rosewood is a hard timber species with durable, distinct looking grain which takes more than 100 years to mature. They are wild species which are not cultivated but grow by themselves.

In January 2014, the government placed a ban on the harvesting and export of rosewood from Ghana until further notice.

The ban had since been renewed by successive governments and recently, in March this year, the current Lands and Natural Resources Minister, Kwaku Asomah- Kyeremeh, re-affirmed that the ban was still in force.