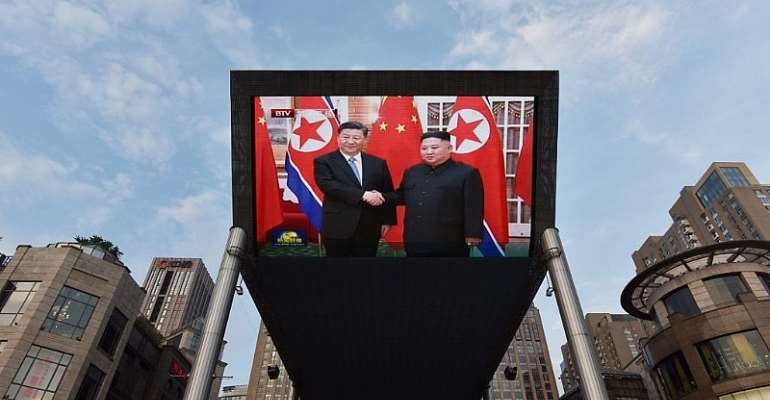 With his visit to Pyongyang, China's president Xi Jinping becomes the highest ever state leader received on home ground by Kim Jong-Un. It is also the first time in 14 years that a Chinese president has visited North Korea. Another diplomatic victory for Kim?

For the first time since 1970, a “foreign leader” writes a signed article on the front page of North Korea's propaganda newspaper Rodong Shinbun (Workers' Daily), putting Xi Jinping at the same level as Mao Zedong.

In a letter, 'Writing a New Chapter in Sino-Korean Friendship,' published in all major propaganda outlets of both communist countries, Xi Jinping says it is time for a new boost in the “70-year-old friendship” that was marked by “foreign invasions” and a struggle for “independence”.

“This should be seen as a sign that President Xi is seeking to bring ever closer ties with the North Korean political regime,” says Dr. James F. Downes, of the Hong Kong Institute for Asia Pacific Studies.

“This strategy could conceivably see China become closer to North Korea economically and seek to move North Korea further away from the United States' sphere of influence.

“If successful, such a strategy would be incredibly damaging for the Trump administration,” he says.

Up and down
Relations between North Korea and China have been up and down over the past years, and they have been “very strange” recently, adds Michael Dillon, author of China, a Modern History.

“North Korea has been trying to independently develop its nuclear weapons far further than China would want."

Kim's direct talks with President Trump as well as with South Korean president Moon Jae-In also left China out of the diplomatic equation.

“Which is rather strange,” says Dillon, “given that the North Koreans relied very heavily on China, particularly for food supplies,” during recent famines.

Soft take
Another sign of Beijing's support came in the shape of China's soft take on UN sanctions against Pyongyang as a result of its nuclear weapons program. China maintained some trade relations, circumventing UN rules.

Under the regime of Kim Jung-Un's grandfather, the founder of the Kim dynasty Kim Il-Sung, North Korea masterfully played the Soviet Union against China, which were at times engaged in fierce ideological battles, extracting favours from both communist giants. Is young Kim now doing the same with China and the US?

“The North Koreans in many ways have also always been playing off both sides against the middle. And this has always irritated the Chinese authorities, who felt that they were being messed about, while they were giving aid to a struggling country."

Xi Jinping's visit to Pyongyang coincides with the meeting of the Association of South East Asian Nations in Bangkok. Asean was initially created as a counterweight against the growing Chinese influence in the region. Is it a coincidence that China is getting friendlier with North Korea again?

“This is no coincidence,” says Downes, “and should be seen under a broader power-play by the current Chinese political regime to ameliorate intergovernmental organisations such as ASEAN."

Downes sees the move as a “long-term strategy by Beijing to weaken these regional forms of architecture" and bring countries such as North Korea “closer to its overall sphere of influence.”

Meanwhile, many Asean member states find themselves in the crossfire of the China-US trade dispute.

“China is saying that it is not suffering very much from the trade rift with the US,” says Dillon.

“But equally they are hedging their bets by trying to get better trade and investment relations with countries like Malaysia and Indonesia, which are in their sights for the Belt and Road Initiative (BRI)."

But the BRI “may in the long-term weaken regional institutions such as the Asean, as it will seek individual countries to form economic agreements and pacts with China, rather than collaborating together in a single economic framework, such as the Asean economic bloc,” adds Downer.

Meanwhile, Vietnam, one of Asean's key members, is seen to be cozying up to the US amidst growing concerns over increasing Chinese influence in the region. But the bloody, shared history may still prevent both countries from going all the way.

“Vietnam is a special case,” says Dillon.
“In theory, Hanoi was close to China in the '60s and '70s. But in 1979, China invaded Vietnam and Vietnam got closer to the former Soviet Union.

Rich uncle
Since its full independence and unification in the 1970s, Vietnam has been determined to develop its own economic policy independent from China.

“Whilst Vietnam may cosy up even more to the US in the future, economically speaking, it is still reliant on Beijing and at the same time, geographically speaking,” agrees Downer.

“It needs to maintain strong relations with China for future economic prosperity."

Adds Dillon: “The Vietnamese, like all other South East Asian countries, are trying to attract Chinese investment. Everybody wants at the moment China to be their rich uncle. And it's rather a difficult tightrope to walk,” he says.