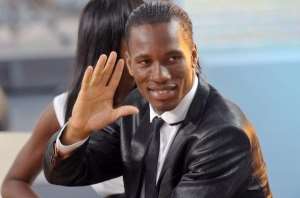 In the Ivory Coast, Standard Chartered Plc may have found its template for the future of banking. Didier Drogba, the retired Ivorian soccer star, was drafted as a “digital bank ambassador" on social media.

Fifteen months later, more than 18,000 of his compatriots have signed up for digital-only accounts, outstripping the London-based lender’s early targets.

Ivory Coast is just one of 60 countries where StanChart operates. What might please StanChart boss Bill Winters even more than new customers -- in a market where it had minimal presence -- is how little it cost to get them in a time of soaring IT costs for banks.

The project was completed in nine months, using in-house technology, working off an existing banking license.

“Forever and a day, it’s been one of the biggest problems of the bank -- it’s in too many countries without a lower-cost way to market,” said Ian Gordon, who heads bank research at Investec Bank Plc. Digital-only banking addresses that structural challenge, he said.

The larger question: whether this strategy will work in StanChart’s biggest markets, which are further along the development curve than sub-Saharan Africa -- and too massive to penetrate with a build-out of traditional branches. Getting Digital

In the big Asian countries, 166-year-old StanChart boomed and busted lending money to local corporates and wealthy families, with retail branch networks in those nations often an afterthought. Digitization is a way to change that -- and stay ahead of big tech companies before they push into finance.

“You can’t walk away from an India, China or Indonesia, and say ‘look -- we are so sub-optimal there is no way we are going to win,’" Aalishaan Zaidi, StanChart’s head of digital banking, said in an interview.

The Ivorian template was followed in Uganda, where the digital bank led to an eight-fold increase in new account openings, and in Tanzania, where more new customers have signed up so far this year than in the whole of 2018. Up next: Nigeria, Africa’s largest economy.

"If we don’t disrupt ourselves, somebody else will do it to us," said Zaidi.

Still, analysts at Morgan Stanley rate StanChart a technology laggard, comparing the bank unfavorably to competitors like Singapore’s DBS Group Holdings Ltd. Winters, who has been chief executive officer for four years, has taken that kind of critique to heart, and knows the bigger markets are a problem.

Speaking to investors at a conference in April, Winters singled out the bank’s “very small” market share in India, despite years of opening traditional branches instead of going digital. Winters vowed to pursue “aggressive digitization.”

“Why have you been beating your head against a wall trying to build a mass-market business, competing with banks that have the structural advantage?” Winters said of his firm. “I can’t really answer that question.”

Winters’s bank doesn’t have the firepower to match the $15 billion-plus that HSBC Holdings Plc will spend on IT in coming years. To stay nimble, StanChart is exploring partnerships with tech firms like Alibaba Group Holding Ltd. StanChart and the Chinese internet giant’s Ant Financial Services signed a pact in 2017 that led to initiatives like a low-cost platform for Filipino workers to send remittances home from Hong Kong.

Back in London, Drogba is reported to be mulling a return to Chelsea Football Club, and Winters, whose bank sponsors northern rivals Liverpool, must reach an ambitious profitability target with help from countries like Ivory Coast. African and Middle East markets account for just a fifth of StanChart’s revenue, but they offer the CEO some of his best opportunities.