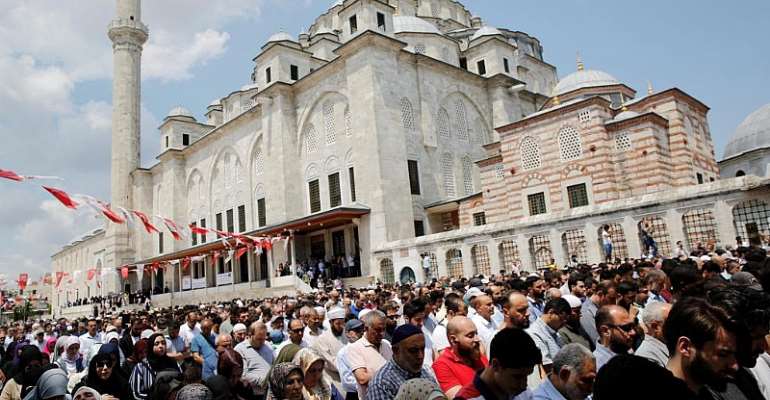 Egypt lashed out at the UN human rights office on Wednesday after it called for an investigation into former president Mohammed Morsi's sudden death after fainting in a courtroom on Monday.

Foreign Ministry spokesman Ahmed Hafez says the call by UN High Commission for Human Rights (OCHR) spokesman Rupert Colville "politicized and immature," a statement many believe is referring to Turkey, which came out immediately after Morsi's death, calling him a “martyr.”

Turkish President Recep Tayyip Erdogan, who had close ties to Morsi while he was in power, said he does not believe he died of natural causes, calling the Egyptian authorities "tyrants."

Turkish supporters of Morsi held funeral prayers for him on Tuesday.

“Concerns have been raised regarding the conditions of Mr. Morsi's detention, including access to adequate medical care, as well as sufficient access to his lawyers and family, during his nearly six years in custody,” said OCHR's Colville in a statement, adding that he was reportedly held in prolonged solitary confinement.

“The investigation should therefore also encompass all aspects of the authorities' treatment of Mr. Morsi to examine whether the conditions of his detention had an impact on his death,” he added, citing Rule 24 of the Mandela Rules- the UN Standard Minimum Rules for the Treatment of Prisoners.

In 2018, a group of British MP warned that not treating Morsi's diabetes and liver disease adequately could lead to his “premature death.” A group of MPs had asked for access to Morsi over a year ago, concerned about the sharp decline in his health.

Colville added that Egypt is a signatory to and has ratified the International Covenant on Civil and Political Rights that lays out the necessary measures needed to protect the lives of those incarcerated.

Morsi, the sole democratically elected leader in Egypt, was head of the now-outlawed Muslim Brotherhood. He served for only a year before he was ousted by his then-army chief, and now President Abdel Fattah al-Sisi in 2013.

Morsi was serving a number of long jail sentences for espionage, among other offences, and was in court regarding another charge that he was in cahoots with Hamas, the Palestinian political armed group when he fainted.

Morsi was buried on Tuesday.