Fearful of elephant attacks, some in Botswana cheer hunting's return 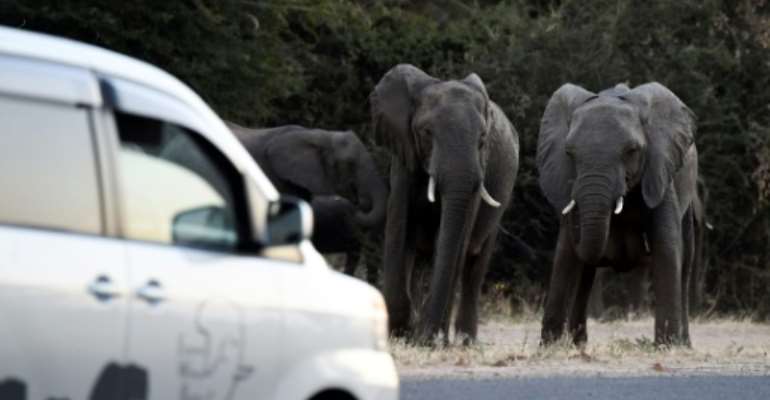 Botswana's lifting of a five-year-old blanket hunting ban is a welcome move to those who fear attacks by roaming elephants. By MONIRUL BHUIYAN (AFP)

An elephant carcass lies at the edge of a field in Legotlhwana village, northeast Botswana -- evidence of the desperation and anger felt by a farmer whose crops have been repeatedly destroyed.

Ishmael Simasiku, 71, indignantly recounts how he was guarding his field as he does every night when an elephant broke through the perimeter fence and helped itself to his watermelons.

Simasiku's attempts to repel the elephant using torchlights and gunshots fired into the air were futile. The animal only retreated briefly and returned.

"The elephant came from the forest and was destroying my crops. The (sports hunting) ban made my life worse," said Simasiku, holding a watermelon half-eaten by an elephant.

The retired policeman in this village near the border with Namibia has seen his corn harvest fall by about 90 percent over recent years as elephant numbers have boomed.

Under the country's wildlife conservation policy, Botswana's elephant population has increased nearly 10-fold since 1970, to 130,000 today, according to the UN Environment Programme.

Farmer Ishmael Simasiku was guarding his field when an elephant broke through the perimeter fence and helped itself to his watermelons. By MONIRUL BHUIYAN (AFP)

As elephants grazed behind him in Chobe National Park , Thebeyakgosi Horatius, head of the park's human-wildlife conflict office, confirms that elephants are "killing people (and) destroying their crops".

His department runs a 24-hour emergency response team to react to elephant attacks.

Last month, the government lifted a blanket hunting ban, imposed in 2014 by then-president Ian Khama, on the grounds that elephant numbers were growing.

The decision angered many conservationists and stirred up a political hornet's nest as elections loom later this year.

"To me it's so sad and extremely painful that all these years' work to build up to what we had achieved is being put in reverse," Khama told AFP by telephone.

"Our tourism is wildlife-based. We have already seen it taking a hit. I'm told our numbers have dropped by 10 percent since they started talking about (re-starting hunting)."

Tourism is the second largest contributor to Botswana's GDP after diamonds.

But an end to the ban on sports hunting has been welcomed by many Botswanans.

Ishmael Simasiku, a farmer whose crops have been repeatedly destroyed by elephants, says the sports hunting ban in Botswana made his life worse. By MONIRUL BHUIYAN (AFP)

On April 26, Merafhe Shamukuni, 53, was walking home down a steep pathway in Kasane, Botswana's wildlife tourist town, when he was attacked and killed by an elephant.

His sister, Dorcus Shamukuni, 49, tearfully remembers her brother who worked as a builder and cared for their wheelchair-bound father.

"No one expected he was going to die that way," said Shamukuni.

While global conservationists are up in arms over the resumption of hunting, locals appeal for understanding over problems caused by freely roaming elephants which live unfenced in Botswana.

"We are here in Africa, facing this on a daily basis (and) all they are interested in is to come and see those animals for a few hours and go back where they are comfortable.

"We are in trouble, something really has to be done," said Shamukuni, who works at a four-star hotel in Kasane.

"I work in tourism, I know the importance of animals... but I don't see the reason they should be killing us in this manner.

Conservationists are angry about Botswana's lifting of its hunting ban. But those fearful of attacks by elephants or of the damage they can cause to crops say the move is necessary. By MONIRUL BHUIYAN (AFP)

At least 34 people have been killed by elephants since the hunting ban came into effect -- 15 of them killed last year alone when 9,000 properties were destroyed, according to government statistics.

President Mokgweetsi Masisi, on a visit to the United States, recently tweeted of another death from elephant trampling.

"The tragedy comes virtually 24 hours after I responded to an elephant protester in Las Vegas and now a brother has fallen," he said.

"I'm so sick of people who say we should not kill. When we had hunting, we never had elephants coming into our villages," said safari guide Petros Tshekonyane, 48, who recently found an elephant devouring his garden.

"It has to come to an end. This is too much. I can't continue planting for elephants."

Poaching on the rise?

Dorcus Shamukuni's brother Merafhe Shamukuni was attacked and killed by an elephant in April as he was walking home. By MONIRUL BHUIYAN (AFP)

Walking around after sunset is risky, and residents wake up to broken fences and destroyed vegetable patches.

Frank Limbo, 48, is a farmer from Satau village who has survived both an elephant and a lion attack.

"One way of controlling is hunting, it has been done in the past," he said.

Kavimba village's chief Josephat Mwezi, 74, said elephants were previously found only in parks "but now they are where we live. We are not after their extinction. We want them... confined to their areas."

Community activist Watson Mabuku admits that poaching has increased in recent years because "we were deprived of our source of protein" when hunting was outlawed.

But according to Khama, it will have little effect in reducing the population because around 650 calves are born each year.

He described most of the animals as "refugees" fleeing poaching in Angola and Zambia and said they should be encouraged to return to their home ranges.

Masisi's plan to re-start hunting could find favour with villagers five months ahead of what could be a tough election for the ruling Botswana Democratic Party.

But Amos Mabuku, who heads a community conservation charity involving 5,000 families in Chobe district, dismisses any link between elections and hunting.

"It's not a question of politics, it's about sustainable use of natural resources and caring for your people," said Mabuku.