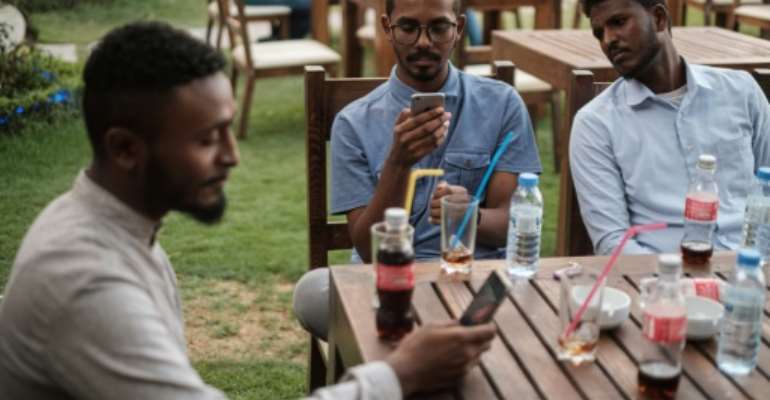 Mohamed Omar (L) sits with his friends at a cafe in an upscale district of Sudan's capital on June 17, 2019. By Yasuyoshi CHIBA (AFP)

In a lush garden cafe in Sudan's capital, a group of youngsters sit eyes glued to mobile phone screens, seeking ways to bypass an internet blackout imposed by army rulers.

"It's as if we have gone back in time -- we are cut off from everything, even from the outside world," said Mohamed Omar, 25, sitting around a wooden table with his friends at the cafe in an upscale Khartoum district.

"Internet is what allows us to know what's happening inside the country and outside."

Internet on mobile phones and fixed land connections has been widely cut across Sudan since the violent dispersal of a protest camp outside army headquarters on June 3 that left dozens dead and hundreds wounded.

The ruling military council imposed the blackout to prevent further mobilisation of protesters, according to users.

"They cut the internet so that people can not communicate, to prevent (them from) gathering," said Omar, who has regularly attended the protests that rocked Khartoum for months.

Initial protests were sparked by a tripling of bread prices in December, and led to the downfall of long-time president Omar al-Bashir on April 11. 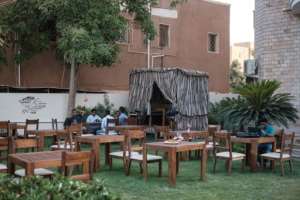 Internet on mobile phones and fixed land connections has been widely cut across Sudan since the violent dispersal of a protest camp outside army headquarters on June 3 that left dozens dead and hundreds wounded. By Yasuyoshi CHIBA (AFP)

But the protesters did not stop there, quickly demanding that the military council that seized power hand over to civilian rule.

Even routine activities like checking social media or booking a taxi through an online app has now become nearly impossible.

"My parents live abroad, the internet was our only means of communication," said Omar, sporting a neat goatee and an elegant knee-length truffle grey tunic.

"Before, we could see each other by video, now I have to (make an international) call," he added.

At the cafe, some sat around wooden tables, while others typed on their phones and some browsed on their laptops.

Here, an hour of internet costs 50 Sudanese pounds, which is approximately one dollar.

Generally across Sudan, the internet is now accessible only through land telephone lines or fibre optic cables, and the connection is erratic. 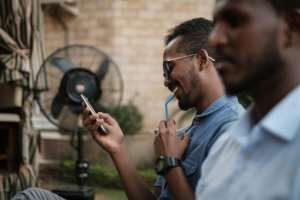 The ruling military council imposed the blackout to prevent further mobilisation of protesters, according to users. By Yasuyoshi CHIBA (AFP)

At the shops' entrances, men and women -- sitting, standing or leaning against the walls -- have their eyes fixed to their mobile phones.

"Cutting the internet is one of the means by the military council to widen the gap between (the protest movement) and the people," prominent protest leader Mohamed Naji al-Assam told reporters this week.

The impact of the blackout was felt Tuesday night when few came out onto the streets, even as protest leaders called for new night-time demonstrations.

Human Rights Watch slammed the blackout as a "gross violation".

"Governments that seek to repress peaceful political opposition have in many instances cut off internet access during times of political sensitivity and crisis," the rights group said in a report on June 12.

For the generals the internet and social media are a threat.

"Regarding social media, we see during this period that it represents a threat for the security of the country and we will not allow that," military council spokesman General Shamseddine Kabbashi told reporters last week.

And on Wednesday, the authorities prevented a consumer protection association from holding a press conference on the internet blackout.

Businesses, hit by the blackout, are struggling to keep their services going.

Kamal, an employee of an international travel agency, said his company -- which regularly books tickets for embassies and UN agencies -- has been forced to make bookings through phone calls and text messages, because they can't access the internet.

"We get calls from our clients, then we call our back office in Nairobi. It is they who book the ticket and text us the ticket number," he said. 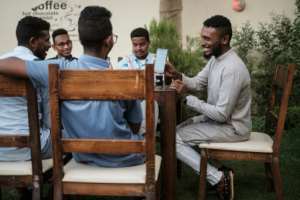 Across Sudan, the internet is now accessible only through land telephone lines or fibre optic cables, and the connection is erratic. By Yasuyoshi CHIBA (AFP)

"We forward the ticket number to the client, who then goes to the airport to take the boarding pass from the airport counter itself."

"If a ticket needs to be modified, we used to do it from our system itself... but now we (have to) send people to the airline office."

Other Sudanese travel agencies were shut for several days this month after protest leaders launched a civil disobedience movement, in the wake of the crackdown on protesters.

"Earlier, four, five, six or seven tickets could be booked in one day, but now it takes four days to book just one ticket," said travel agent Hoiam, whose agency was shut during the disobedience campaign.

The main factor was the "very poor" internet connection at her office, she said.

The internet blackout has been imposed by the generals "to put an end to the revolution," she said.

"But still, with or without internet, people manage to communicate."