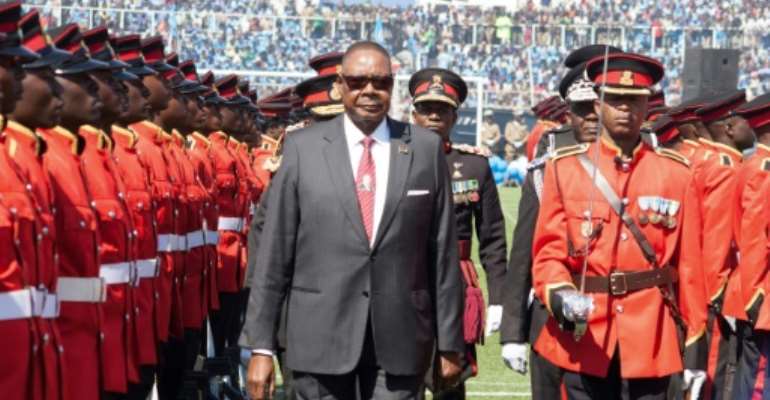 President Peter Mutharika Mutharika left Lilongwe for Malawi's second city, Blantyre, prior to May 21 elections and stayed there for his swearing in ceremony.. By AMOS GUMULIRA (AFP/File)

Malawi police fired teargas Wednesday to disperse protestors blocking the M1 main route into Lilongwe as President Peter Mutharika was due to enter the capital from Blantyre.

Malawian journalist Lameck Masina who witnessed the fracas told AFP there were running battles between police and protestors who had lined the road with burning tyres.

"The protestors had erected a makeshift roadblock... using burning tyres. They were also pelting the police with stones," he said.

"In retaliation, the police used teargas to disperse the crowd and this caused a lot of commotion and disrupted businesses, forcing several shop owners to close their businesses."

In the end, the president entered Lilongwe by a different route, his spokesman Mgeme Kalilani told AFP, adding "the decision as to which route to use is made by the police.

"So, I wouldn't know why this time they decided that he should use the by-pass route," he said. "If someone has to explain why the president used that route, then it has to be the security people, who in this case are the police.

Police spokesman James Kadadzera declined to comment on the matter.

Mutharika left Lilongwe for Malawi's second city, Blantyre, prior to May 21 elections and stayed there for his swearing in ceremony days later.

Wednesday was his first trip to Lilongwe since the vote, ahead of opening parliament on Friday.

Protests erupted in Malawi following Mutharika's election victory, mainly in Lilongwe which is the power base of the opposition Malawi Congress Party (MCP), which has claimed there were irregularities.

The MCP, which came second in the polls, is challenging the outcome in court along with the United Transformation Movement.

A panel of five judges will rule Friday whether or not to dismiss the case, as requested by lawyers for Mutharika and his Democratic Progressive Party.