Van Gogh revolver auctioned in Paris, but doubts over his suicide remain 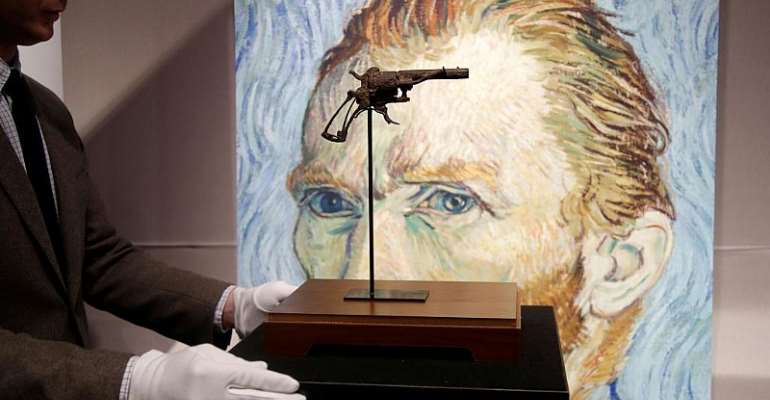 The famous 7mm pistol thought to be the one used by Dutch painter Van Gogh to shoot himself sold in Paris for €162,500, nearly three times the estimate. There is no certainty the weapon is the one the tormented painter used, but the auction has also reignited debate over who pulled the trigger.

A private collector bought the gun, billed as the "the most famous weapon in the history of art", with a telephone bid.

The tormented Dutch painter died in July 1890 and experts believe he shot himself in the chest with the revolver in a field near Auvers-sur-Oise, a village north of Paris where he spent the last few months of his life.

The badly corroded pistol was discovered by a farmworker in 1965 in the same field and was later exhibited at the Van Gogh Museum in Amsterdam.

AuctionArt, which is selling the gun, says there is no way of being absolutely certain it is the fatal weapon, but tests showed it has been in the ground for 75 years, which would fit the hypothesis.

The Dutch artist had borrowed the gun from the owner of the village inn where he was staying and died 36 hours later after staggering back to the auberge with the bullet still lodged in his chest.

His last words, according to his brother Theo, were "the sadness will last forever”.

The bullet extracted from Van Gogh's chest was the same calibre as the one used by the Lefaucheux revolver.

"Technical tests on the weapon have shown the weapon was used and indicate that it stayed in the ground for a period that would coincide with 1890," Auction Art told AFP, adding that "all these clues give credence to the theory that this is the weapon used in the suicide”.

Shot in a scuffle?
But two American writers have cast doubt on the theory Van Gogh committed suicide.

In their 2011 biography “Van Gogh: The Life”, Gregory White Smith and Steven Naifeh argue that the painter did not shoot himself, but was shot accidentally by 16-year-old local boy René Secrétan who was playing with the weapon in the field.

They claim that Secrétan and his brother befriended but also bullied Van Gogh when he was staying in Auvers and that the pistol belonged to Secrétan.

Writing in Vanity Fair, the authors suggested that the artist was shot during a scuffle with Secrétan, but then, wishing to cover up for the boys, gave the impression he had shot himself.

That theory won fresh support from a new biopic of the artist starring Willem Dafoe, "At Eternity's Gate", in which the gun goes off after the two brothers get into a struggle with the bohemian stranger.

The auction house acknowledged that the gun could also have been hidden or abandoned by the two boys.