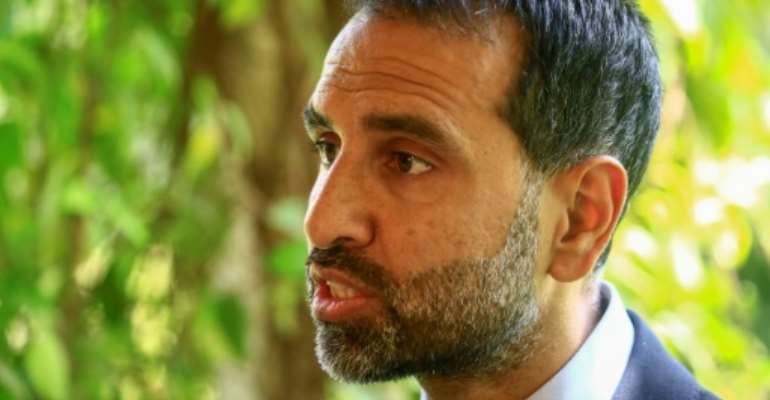 Irfan Siddiq, Britian's ambassador to Khartoum, has warned that Sudan could face major problems if its ruling military council fails to hand power to civilians. By ASHRAF SHAZLY (AFP)

Sudan's ruling generals must swiftly hand power to civilians if they are to regain the trust they lost after a deadly crackdown on protesters this month, Britain's envoy to Khartoum has told AFP.

Crowds of protesters who had camped for weeks outside the capital's army headquarters to demand civilian rule were violently dispersed on June 3 by armed men in military fatigues.

The gunmen shot and beat protesters at the crack of dawn in an operation that left dozens dead and hundreds wounded, according to doctors and witnesses.

The killings sparked a wave of international condemnation, and the ruling military council has distanced itself from the events.

But Irfan Siddiq, Britain's ambassador to Khartoum and a leading advocate of civilian rule in Sudan, said the military council was ultimately responsible.

"At the end of the day, it is the security forces who conducted these raids and led to the killings of the people," Siddiq told AFP in an interview at his official residence in Khartoum.

"Therefore, the military council bears responsiblity for taking the steps to build and rebuild the trust and confidence that would enable the civilian transition to occur."

Sudan's Rapid Support Forces (RSF) have been accused of involvement in the killings. By Yasuyoshi CHIBA (AFP/File)

At least 128 people have been killed since the crackdown, the majority on the day the sit-in was cleared.

That is according to doctors linked to the protest movement that led to the ouster of longtime leader Omar al-Bashir and his replacement by the military council in April.

The health ministry has put the nationwide death toll on June 3 at 61.

The military council has expressed "regret" over what happened but insists it had only ordered the clearing of an area near the protest camp where drug dealers had reportedly operated.

The initial findings of a military investigation showed that "officers and soldiers of different ranks and regular forces" had entered the sit-in itself without orders from their superiors, the investigating committee said.

Siddiq, a fluent Arabic speaker who began his Khartoum posting in April 2018, said the international community was waiting for the committee's report.

The June 3 killings have sparked international anger, including in Washington. By Brendan Smialowski (AFP/File)

"Therefore, I think we need to see measures from the military council that build trust, build confidence" among the Sudanese public and the international community, he added.

Minutes after the assault began, Siddiq, whose residence is near the army headquarters, had heard gunshots and raised the alarm on social media.

"No excuse for any such attack. This. Must. Stop. Now," he tweeted as the operation was in progress.

He said he had heard the attack taking place at 5 AM on June 3.

"I could hear the shooting and it seemed to me that it was pretty clear to me what was happening, which is why I made my statement," he said.

"Unfortunately, the killing happened and a lot of people lost their lives and there has been trust that has been lost."

The assault took place days after talks between the generals and protest leaders collapsed over who should lead a new governing body -- a civilian or soldier.

Protesters demanding a civilian administration had camped for weeks outside the army complex to pressure the generals, who seized power after Bashir's ouster, to step aside.

Siddiq said the African country could face major problems if it fails to install civilian rule.

"A country like Sudan that has suffered for 30 years with bad governance, with isolation, with sanctions, with conflict, with economic mismanagement, really needs and deserves better," he said.

The envoy warned that if the generals fail to hand power to civilians, Sudan's international relations would continue to suffer.

Sudanese protesters set up roadblocks in Khartoum to try and prevent authorities' attempts to break up the sit-in demanding civilian rule. By ASHRAF SHAZLY (AFP/File)

Siddiq praised the achievements of protesters over the past six months, since the first protests erupted exactly six months ago on December 19 after the government tripled the price of bread.

But the ambassador said he now feels the "revolution" risks failing to achieve its goals.

Although the movement managed to topple Bashir, things have not gone as the protesters hoped, he said.

"The fact is that the killings that took place on 3rd June have complicated the situation, and have made it more difficult to come to an agreement," Siddiq said, adding that the protesters' demand for a civilian democracy was justified.

"If the will of the people of Sudan... isn't implemented, then I think we go back to popular uprising potentially coming back."