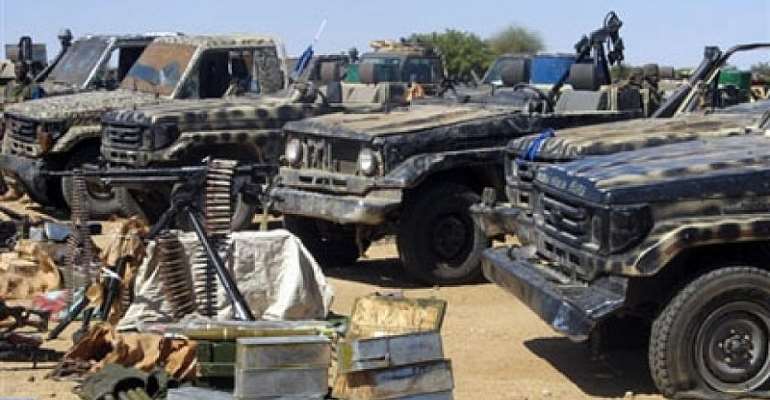 French investigators' arrest on Monday of Chadian rebel leader Mahamat Nouri over alleged crimes in Sudan and Chad between 2005 and 2010 drew both praise and criticism in Chad and in France.

The Paris prosecutor's office said Nouri and two others were arrested as part of an investigation opened in May 2017.

Others arrested include Abakar Tollimi, spokesperson of Nouri's rebel group the Union of Forces for Democracy and Development (UFDD), and Abderrahman Khalifa Abdelkerim, a half-brother of Nouri and member of another rebel group.

It was not clear which individual or group filed the complaint that led to the arrests, but the investigation is being handled by France's Central Office for Combatting Crimes Against Humanity, Genocide and War Crimes (OCLCH).

The OCLCH operates in the legal framework of universal jurisdiction, meaning it can arrest an individual on French territory over alleged offences committed elsewhere.

It was also not clear exactly what crimes Nouri was accused of, although the investigation concerns a period in eastern Chad and in the neighbouring Darfur region of Sudan marked by intercommunal violence, militia attacks and political instability.

Close to Hissène Habré
Nouri was close to former president Hissène Habré, who left Chad in 1990 and was sentenced to life in prison by a court in Senegal for human rights abuses in 2016.

“He committed crimes in the war in Chad,” remembered Clément Abaifouta, who heads an N'Djamena-based group supporting victims of Habré.

“He's in Habré's tribe […]. If he returns to this country, in my view, he's not a man who would be welcome here. I think he's a bad man considering what he did under Hissene Habré.”

Nouri remained in influential positions under Habré's successor Idriss Deby, first as defence minister between 2001 and 2003, then as ambassador to Saudi Arabia from 2004 to 2006.

Assault on presidential palace
But Following Deby's controversial re-election in 2006, Nouri went to Sudan and worked with different rebel groups.

In February 2008, he led an assault into Chad's capital N'Djamena, reaching the gates of the presidential palace before being fought off with the help of French forces.

“We saw how France came to the rescue of Idriss Deby,” said Mahamat Affileck Halata, a NFDD member also living in France.

“Now France is hunting down political opponents and has become the armed wing of the regime of Idriss Deby,” he told RFI.

Nouri was sentenced to death in Chad in absentia for the incursion in 2008. He left Sudan in 2010, going first to Qatar before coming to France.

Human Rights Watch and the Paris-based International Federation of Human Rights (FIDH) denounced alleged crimes during the 2008 assault as well as violations of human rights in Chad and Darfur.

“We hail such an arrest, a first for crimes committed in Sudan and Darfur, especially because of the impunity that has reigned and continues to apply in the general sense for these crimes,” human rights lawyer and FIDH honorary president Patrick Baudouin told AFP agency.

However, the Chadian Convention on the Defence of Human Rights, an N'Djamena-based group critical of Deby, said in a statement it was “appalled by the French authorities' wave of unjustified and arbitrary arrests of members of the opposition in exile”.