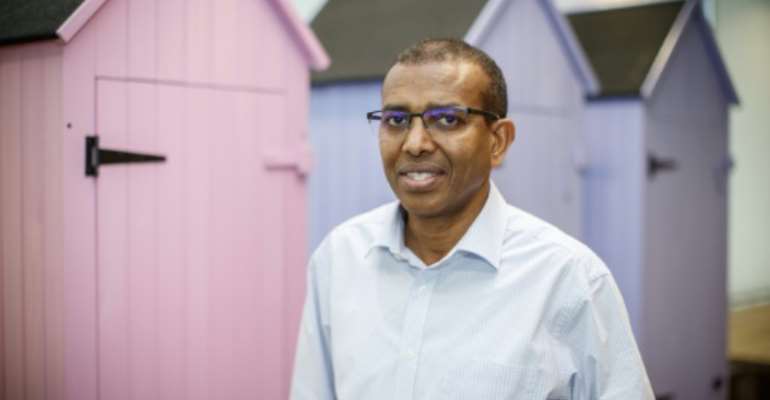 The money transfer business is personal for Ismail Ahmed. It was cash wired by his family that allowed him to make the final leg of his journey from escaping fighting in his native Somaliland to London in 1988 to take up a university scholarship.

Today, Ahmed leads WorldRemit, one of a handful of fintech firms that is upending the remittances business that has long been dominated by three US firms -- Western Union, MoneyGram and Ria -- as well as banks.

Piggybacking on the development of mobile money systems in Africa and other developing countries, these fintech firms offer migrant labourers a more convenient way to send money home at a lower cost.

The market for personal transfers is sizeable, with the World Bank putting it at $689 billion in 2018. Some $529 billion of that was sent to people in developing nations, an increase of 9.6 percent from the previous year.

And personal transfers are important, not just for the recipient families.

"Remittances are on track to become the largest source of external financing in developing countries," economist Dilip Ratha said this year when presenting the World Bank's latest report on remittances.

One of the report's main conclusions was that the high cost of transfers reduce the benefits of migration.

It found that the global average cost of sending $200 remained high, at around seven percent in the first quarter of 2019, with costs for African and Pacific island nations above 10 percent.

Those high fees give ample room for new entrants -- fintechs who are leveraging technology to lower costs.

For Ahmed, founding WorldRemit in 2010 was just the latest step in a career that has centred on remittances.

His first small jobs as a student not only helped to support himself, but his refugee family, where he first encountered the inconvenience of having to trek to the office of a transfer agent that took up to 20 percent of his money in fees.

Ahmed became interested in remittances when, as a student, he found it difficult to transfer money to his refugee family. By TOLGA AKMEN (AFP)

"That's the beginning of my interest in remittances," he told AFP. "Very early I learned about how remittances worked ... it was key source of discomfort" as well as being expensive.

Ahmed chose to write his dissertation about the effect of such payments on people, which in 2005 led to a job with the United Nations Development Programme in Nairobi helping remittance agents comply with regulations to prevent money laundering and financing of terrorism.

"As soon as I joined, I saw widespread fraud and corruption involving UN official and consultants," he said.

Ahmed became a whistleblower against the practices, but said that UN investigators were "only interested in identifying who the whistleblower was" and he was pushed out of his job.

In 2010, the UN Ethics Committee awarded him compensation worth a year's salary for the way he was treated -- a well-timed cash boost as he was looking to found WorldRemit.

While Africa represents more than half of its transactions, WorldRemit serves more than 47 countries, including many in Asia and Latin America.

They have partnered with mobile money firms that helped revolutionise the lives of many Africans, who often do not have bank accounts, by making mobile phones a way to transfer money inside countries.

Without having the expense of its own network of agents, WorldRemit can offer its services at a lower price, which makes it possible for people to send lower amounts when their families need money urgently.

But that is not the only advantage.

"Digitalisation is a shift from informal to formal economic activities," said Ahmed.

The money transfer business is being upended by new fintech firms such as WorldRemit and TransferWise. By Yingke ZHAO (AFP)

The informal nature of many old-fashioned remittance services, where there was no or little control over the identity of those transferring money, had led Western banks to stop serving several countries in order to avoid running afoul of anti-money laundering and terrorism financing regulations.

"A lot of our traditional competitors accepting cash often pick up huge fines because of the fact that they are outsourcing their core compliance functions to somebody who owns his small corner shop, who is doing money transfers as a side business," said Ahmed.

He said procedures that digital firms employ to ensure compliance are more robust and that a part of WorldRemit's early work was spent convincing regulators of that.

Despite the number of competitors now crowding the sector, Ahmed believes there is plenty of room for growth.