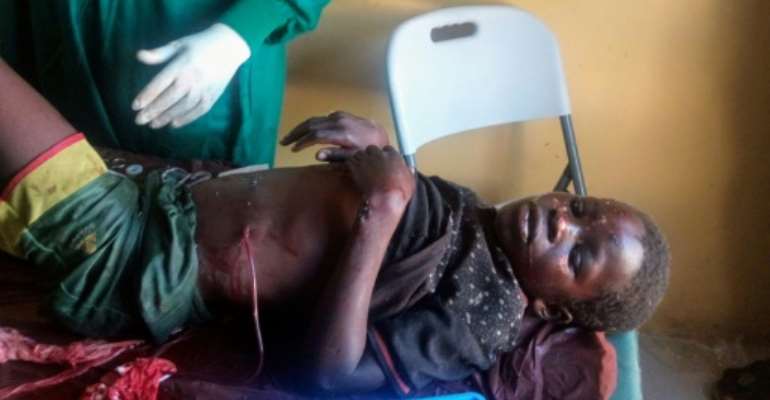 More than 40 people were injured in the triple suicide bombing in northeast Nigeria's Borno state that claimed 30 lives. By Audu Ali MARTE (AFP)

Suspected jihadists killed 15 soldiers at an army base in restive northeast Nigeria, stealing weapons before looting shops in a nearby town, military sources said Tuesday.

The raids late Monday came a day after 30 people were killed in a triple suicide bombing that also bore the hallmarks of the Boko Haram group.

"Fifteen bodies of soldiers have so far been recovered in a search and rescue operation," a military officer, who asked not to be named, told AFP after the latest attack.

"This figure could change as the operation is still ongoing and many troops remain unaccounted" for.

Boko Haram's decade-long campaign of violence has killed some 27,000 people and displaced about two million in Nigeria.

The latest assault targeted a base outside the town of Gajiram, 80 kilometres (50 miles), north of the Borno state capital Maiduguri.

The assailants were suspected to be from an IS-affiliated Boko Haram faction known as the Islamic State West Africa Province (ISWAP).

They arrived on nine armoured trucks and "dislodged troops from the base after a fight," a security source told AFP.

The attackers carted away weapons and vehicles and set fire to the base, causing substantial damage, the sources added.

Residents said they then drove into the town and looted shops, shooting into the air.

Their presence forced residents to flee into the bush while others shut themselves in their homes.

"They didn't hurt anyone and they made no attempt to attack people who fled into the bush or hid indoors."

Soldiers were seen returning to the town from the bush Tuesday morning.

Gajiram lies on the highway linking Maiduguri and the garrison town of Monguno, 55 kilometres away.

Gajiram and its army base have been repeatedly attacked by insurgents.

Last week, several troops were killed in an ISWAP attack on a remote base in Kareto village, near the border with Niger, according to military sources.

Sunday's suicide bombings occurred in the town of Konduga, 38 kilometres from Maiduguri.

Three bombers detonated their explosives outside a hall where football fans were watching a match on TV, killing 30 and injuring about 40 others in an attack condemned by the UN.

The attacks appeared to be the work of a Boko Haram faction loyal to longtime leader Abubakar Shekau.

Boko Haram violence has spilled over into neighbouring Niger, Chad and Cameroon, prompting formation of a regional military coalition to defeat the jihadist group.