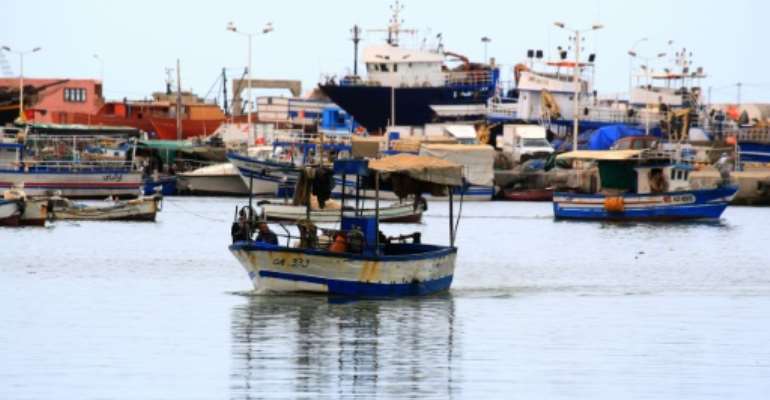 A fishing boat is pictured in the southern Tunisian port of Zarzis, where 75 migrants had been stranded for two weeks. By FATHI NASRI (AFP/File)

Seventy-five migrants rescued in the Mediterranean and stranded for two weeks off Tunisia will be allowed to disembark after accepting that they will be returned home, the Red Crescent said.

Representatives of the International Organization for Migration are preparing to meet the migrants, to find out what they want to do, before the IOM finances their potential return.

But "it is their choice to return (home) or not", said Lorena Lando, the head of the IOM in Tunisia.

Egyptian tugboat Maridive 601 rescued the migrants off the southern Tunisian coast in late May after they embarked from Libya, a key launchpad for sub-Saharan Africans making dangerous bids to reach Europe by sea.

The vessel has been anchored since May 31 off the southern port of Zarzis, where authorities have refused to allow the vessel to dock despite an appeal by the boat's captain.

After a visit by officials from Bangladesh's embassy, the migrants agreed to return home, according to Mongi Slim, a Red Crescent official.

Red Crescent representatives are preparing to welcome to port 64 Bangladeshis, nine Egyptians, a Moroccan, a Sudanese citizen, who left Zuwara in Libya in late May.

The migrants -- which include at least 32 children and unaccompanied minors -- are to be transferred to a reception centre in Sfax.

The migrants would return home from Thursday, Slim added.

Last August, another commercial ship, the Sarost 5, was stranded for more than two weeks at sea with 40 migrants that it had rescued.

Worried about creating a precedent, Tunisian authorities said they accepted the migrants as an exception and for "humanitarian" reasons.

On May 10, 16 migrants -- most from Bangladesh -- were saved by Tunisian fishermen, after their boat sank, killing around 60 others. Two of those rescued decided to return home.

Humanitarian boats and those of the European Union's "Operation Sophia" anti-piracy force had scooped up most stranded migrants in recent years.

But rescue operations dropped in 2019, due to a reduction in Sophia's operational zone and steps taken against rescue NGOs by European states seeking to limit migration.

Doctors threaten strike from October 1 over arrears
50 minutes ago