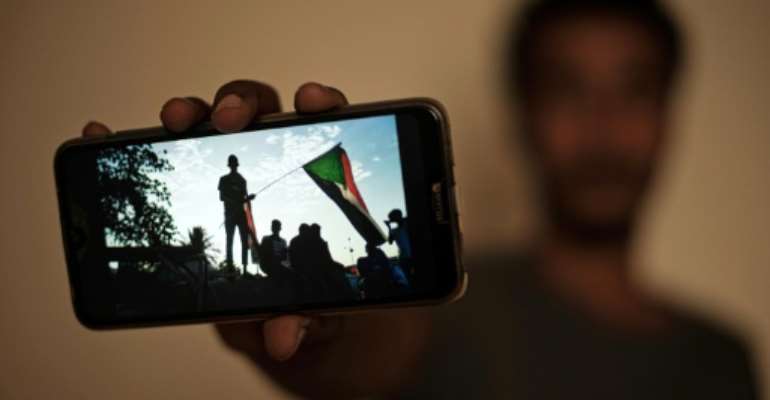 Sudanese protester Akram, who prefers to keep his identity hidden, shows a picture from a sit-in brutally cleared by men wearing military fatigues on June 3. By - (AFP)

It was the crack of dawn when armed men in pick-up trucks stormed into a Khartoum protest camp, shooting and beating hundreds of Sudanese demonstrators on June 3.

"Everyone started running for their lives," said protester Akram, who gave only his first name fearing reprisals by authorities.

"It was very brutal."

Crowds of protesters camped outside the Khartoum army headquarters were violently dispersed that day by armed men in military fatigues, leaving dozens dead and hundreds wounded, according to doctors and witnesses.

They had been gathered at the complex since April, initially seeking the army's help to oust longtime ruler Omar al-Bashir, and later to demand the generals hand power to a civilian administration.

Akram said some of the armed men wore police uniforms, while others were in military fatigues generally worn by the feared Rapid Support Forces (RSF) paramilitary group.

He said it was difficult to count how many they were, but the gunmen arrived in trucks and raided the sit-in from all sides.

"They first attacked us with batons and sticks," Akram, dressed in the same blue shirt he wore the day of the crackdown, told AFP at the home of a fellow protester in Khartoum.

"At first the protesters were able to push back," he said, describing the early morning raid.

"But then a bigger force wearing the uniform of the Rapid Support Forces stormed in and started shooting protesters who were standing at the barricades."

During the weeks-long sit-in, protesters had put up barricades at all entry points to the camp to prevent security forces from entering and attempting to clear them.

But on June 3 the demonstrators were no match for the armed men.

"Blood for blood, we will not accept compensation," demonstrators chant, using a catchcry of the protest movement as they come under attack in footage Akram took on his phone during the assault.

The footage shows protesters, both women and men, running through the wide-open area, many of them bleeding as gunfire cracks the early morning calm.

Akram showed AFP footage from the crackdown of terrified protesters, many of them bleeding, running as gunfire cracks the early morning calm. By - (AFP)

Akram said protesters hurled rocks at the armed men but failed to stop the assault.

"I saw two female doctors beaten, dragged and stripped of their headscarves," he said, still shocked from the violence he witnessed.

Other protesters with him at the Khartoum house left the room as he recalled the violence, unable to listen to the testimony.

Akram believes he is simply lucky to be alive.

"Four times I was standing in a spot and someone behind me was shot," he said, adding that those trying to film the violence on their phones were primary targets.

He recalled watching people rushed into a makeshift field clinic at the protest camp.

"There was blood gushing out from legs, stomachs and arms."

With armed men in full control, Akram had no choice but to escape.

"I was so exhausted and frustrated as I was running from the site. Our sit-in was over," he said.

At least 128 people have been killed in the crackdown, the majority of them the day the sit-in was cleared, according to doctors linked to the protest movement.

The health ministry put the June 3 death toll nationwide at 61.

Sudan's ruling military council insists it did not order the dispersal, saying it had actually planned to purge an area near the protest camp where people allegedly sell drugs.

General Mohamed Hamdan Dagalo, deputy chief of the military council, on Sunday vowed to hand harsh punishments to those who carried out the raid.

"We are working hard to take those who did this to the gallows," said Dagalo, who also heads the RSF, the group protesters and rights groups accuse of carrying out the crackdown.

Brigadier Abderrahim Badreddine, spokesman for the committee set up by the council to probe the violence, said Saturday that initial findings showed "officers and soldiers of different ranks from regular forces entered the sit-in without any orders from their superiors".

These men were not part of the troops ordered to purge the nearby area, he said.

Like Akram, protester Mustafa managed to flee the sit-in unharmed as men armed with batons chased him.

But the memories of what he saw that morning continue to haunt him.

Sudanese protester Mustafa hides his face with a placard reading "Freedom, Peace, and Justice" in Arabic. By - (AFP)

Thick smoke billowed over the complex as the attackers tore down make-shift tents set up by the protesters and set them on fire, Mustafa said, recalling the scene he saw over his shoulder as he fled.

"There was killing and torturing everywhere," he said.

"Any attempt to return to the sit-in would have been not only illogical but suicidal," he said, adding that seven of his friends were wounded in the violence, including from gunshots.

Two weeks after the crackdown, protesters like Mustafa and Akram have lost trust in the country's security forces, including the generals they at first hailed for ousting Bashir on April 11.

"The military council could never be trusted," said protester Mosaab, who said a friend of his was killed during the sit-in raid.

Demonstrators are still determined to carry on with their movement, and the Alliance for Freedom and Change umbrella protest group has called for more nighttime rallies starting Tuesday.

"We thought the time of making sacrifices was over," said Mustafa, recalling the prevailing sentiment among the protesters after Bashir's ouster.

"But it seems we have more to do, and we are ready."