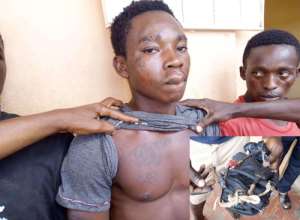 The police in Akyem – Swedru in the Eastern Region is holding three men for allegedly robbing some senior high school students on June 12.

ASP Sabastian Maya, the Akim Swedru District Police Commander confirmed the incident and said subsequently Richard was arrested on June 13 at Akim Swedru while Micheal and Frank were picked up from their hideouts at Abenase in the Akyemansa District the next day.

He said the suspects broke into the room of the students on last Wednesday night around 11:30 pm when they were asleep and ransacked the room and went away with four mobile phones, GH¢20, a canvass, and a school bag.

According to the police officer, in the course of the attack, one of the students sustained a knife wound on his left-hand while the other was hurt with ply on his chest.

The Police Chief said they found some mark believed to be meant for spiritual protection on the bodies of all the suspects and also retrieved an object which looked like a charm from Michael who investigation revealed was the leader of the group at their hideout in Abenase.

He said the victims were given forms to receive medical treatment at the Oda Government Hospital and the suspects were in custody assisting in the investigation of the case.