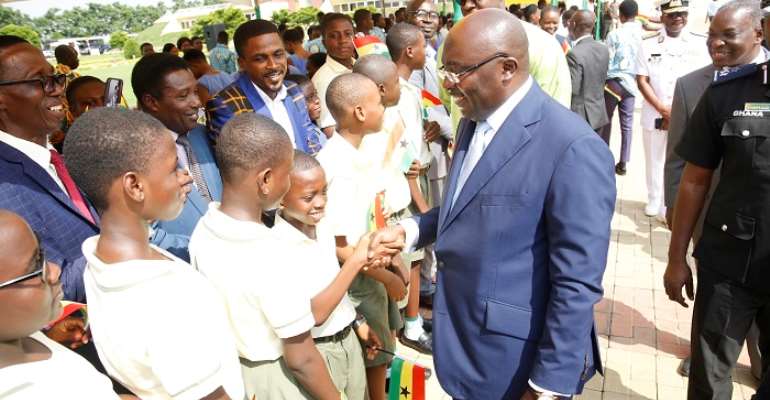 Vice President Dr. Bawumia exchanging pleasantries with some pupils after the function

This saw the change of security guards at the presidency from the officers and men of the Air Force to the Ghana Army.

It was the second change of guard this year at the seat of government.

Prior to yesterday's ceremony, the Air Force had been in charge of security at the place.

A ceremonial parade (change of guard) is considered the noblest and proudest form of drill which for hundreds of years has remained the foundation of battle discipline in all armies.

Once the elements of discipline have been instilled through drill on the parade square, it develops, naturally into various forms; crew drill, gun drill and battle drill.

This is an old tradition inherited from the British during colonialism and is fashioned along what obtains at Buckingham Palace in England.

The drill enhances alertness and readiness at all times and to also ensure availability and serviceability of all equipment at all times.

It also promotes esprit de corps among the troops and constant fortification of the duty point.

In the Ghana Armed Forces, guard changing is a daily occurrence in every unit.

Usually, a section of troops (10 soldiers) under the command of an officer (lieutenant or captain) conducts the unit’s guard change drill.

Instituted on May 5, 2013, it is conducted with 20 each of old and new guards from different services or regiments (army, navy and air force), escort contingent, corps of drums and the national or regimental colours under the command of a captain in the army or its equivalent from the other services.

It is a replica of the guard changing system at the general headquarters command gate of the Ghana Armed Forces.

The guard changing ceremony at the presidency is evolving; opened to school children as an opportunity to interact with the President or the Vice President who are usually the review officers.