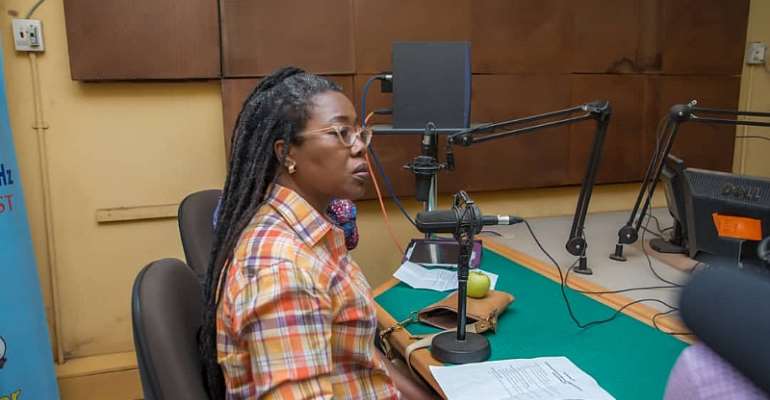 The Chief Executive Officer of the Ghana Export Promotion Authority (GEPA), Ms. Afua Asabea Asare has bemoaned what seems to be a "winner takes all" attitude that is becoming a characteristic of some exporters in the country.

She made this remarks during a Radio discussion on GBC's URA Radio 89.7 MHz in Bolgatanga monitored by ModernGhana, when she embarked on a 4-Day working tour of three Northern Regions to interact with exporters in the region who deal mainly in shea nuts and shea butter processing as well as basket weaving.

As part of GEPA's agenda to reach a target of $5.3 billion export trade by 2021, the CEO is embarking on a tour of all regions to interact with exporters to identify the challenges they face and ways in which it can be mitigated.

She strongly believes this will go a long way to improve productivity and increase export yield.

In responding to whether our local exporters are able to produce to meet global demands during the interview, she noted that she has identified a very worrying trend where some exporters receive orders that are beyond their production capacities but they keep it to themselves instead of leveraging on the capabilities of others in their industry to deliver the required volume to keep everyone in business.

"We have seen several instances where a buyer abroad place an order for a quantum of goods to be delivered by a local exporter who doesn't have that capacity, but instead of him/her bringing others on board to deliver to the buyer to keep the business, they keep it to themselves until they're able to deliver just a fraction of the order by themselves and most times they end up losing the whole contract", she lamented.

She advised exporters to work in groups whenever the need arises.

"Exporters must begin to synergise to have competitive advantage in order to deliver on big ticket orders. As an export promotion authority our major interest is to see our non-traditional export volumes go high and translate us into an export-led economy which will correct our trade balance", Ms Afua added.

In the case of the Shea butter processing industry in the North, reference can be made to the PBC Shea Ltd which has an installed capacity to process 200 metric tons of Shea butter per week but currently operates just about half of its capacity due to inadequate demand that meets our full capacity.

This was made known when the CEO and her entourage paid a working visit to their factory plant at Buipe.

GEPA expects exporters who receive orders beyond their production capacity to team up with a company like this to supplement their capacity in order to deliver fully.

Mr Alexander Dadzawa, Director of Projects at GEPA in commenting on the issue drew a hypothetical analysis citing the example of Ghana-Cote d'Ivoire cooperation agreement on Cocoa Export to be able to influence the determination of Cocoa Prices on the world market.

"Because Ghana and Cote d'Ivoire have come together they have become stronger and now they are going to be able to command how much cocoa beans sells on the world market but if we had gone our separate ways, foreigners would still have determined the price for us", he added.

Exporters were admonished to work in groups especially when they receive huge orders from their foreign buyers.

"At the end of the day everyone does his or her business and makes profit, our export trade volume goes up, we earn foreign exchange, the helps our GDP and the benefits go on and on", he concluded.