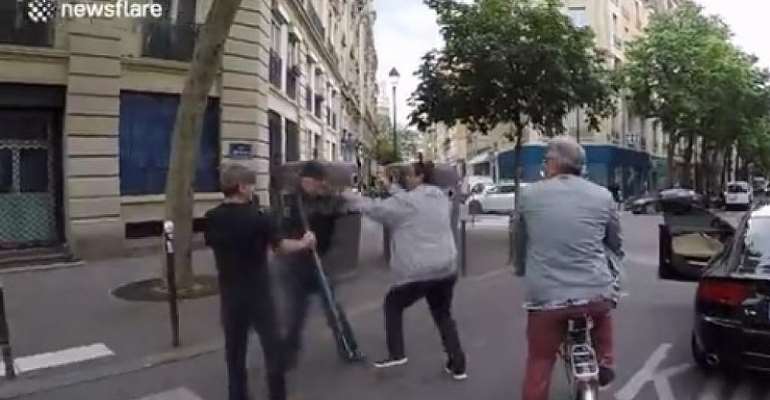 A video filmed on Saturday morning in the 12th district of Paris shows a driver attacking two pedestrians, one of whom is blind, after brushing past them on a pedestrian crossing.

The video, which appeared first on the LiveLeak network, has gone viral on Twitter and other social media after circulating since Sunday on social networks.

It shows a blind person and his companion being assaulted by the motorist who has just grazed them on a pedestrian crossing.

This video provoked angry reaction across the web from internauts outraged by a driver who attacked a disabled person trying to cross the road.

It shows that despite the pedestrians being well out onto the crossing, the driver of the car - an Audi A7 – drove through the crossing without stopping and almost hit them.

The blind person's guide reacted by hitting the roof of the car to warn the driver to pay attention. The car then stops. The driver gets out of the car, but instead of apologising, he rushes over to the two pedestrians and violently pushes the disabled person's guide, slaps him and tries to hit him again and again.

The cyclist on the right of the video, in reaction, announced that he would call the police and took out his phone to take a picture of the license plate of the Audi.

“It was impossible to reason [with him]. Even his wife could not calm him down. The only way I found [to calm him down] was to cry out loud that I was going to call the police. It is at this moment that he recoils and returns to his car,” he told LiveLeak

In a Facebook post, the Federation of the Blind and Partially Sighted in France stressed "the inadmissibility of this situation and invite[s] the visually impaired person as well as his companion, to file a complaint right now so that this situation does not happen again and is condemned".

It is not clear yet whether the pedestrians have filed charges.