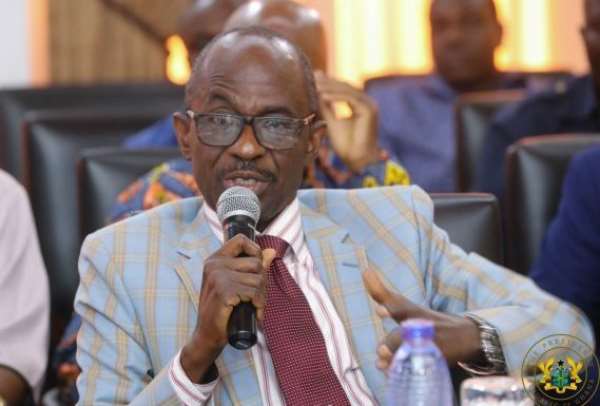 I don't understand why these NDC folks wouldn't allow my pen to rest. I have always resisted the temptation not to comment no their utterances but like the devil, they will not stop sinning and stop wishing evil and doom on the good people of Ghana, so I also can't stop writing. As the Akan proverb goes " kukru kukru ne gyae aa, keka keka nso b3gyae".

As I am writing, I am resisting the use of certain words that best describes them and as I do, I find it difficult to flow like I know myself to be.

I am also finding it difficult to determine between Sammy Gyenfi who in my earlier articles has dealt extensively on him, is sick from media attention. Because today it is Sammy and the next day it is Mr Asiedu Nketia the general Secretary of the opposition NDC, will make a statement more irresponsible for being charitable. It looks like a tug of war between them in the media space for who is the dumbest.

Mr. Asiedu Nketia is reported to have said that Ghana is likely to be attacked by terrorists from Afghanistan because Nana Addo has appointed Mr Bryan Acheampong as a minister for National Security just because he fought in the American occupation in Afghanistan some years back. Who in his right senses make this comment if not to seek attention and satisfy his psychological emptiness. I would recommend he sees a psychiatric to evaluate him if everything is working well. That is a free advice I'm offering him. Please don't call to pay. It's free like free SHS.

I can't think far! In fact I don't think madness! How can such a person who has been in the political space for such a long time and has seen it all make such a reckless statement? I thought he would have given that honor to his competitor Sammy, who is known for that.

I am much concerned be abuse he is the general Secretary of the biggest opposition party in Ghana unaguabbly. Or he is competing with Elder Ofosu Ampofo the crown of who is the most wicked? This is a clear invitation to criminals to visit terror on the good people of Ghana. These are the same people who is seeking the mandate of Ghanaians to lead them as a government.

I am therefore calling on all stakeholders and the general public to condemn that recklessness and reject NDC as a political party because they don't have anything for Ghanaians.

I'm my candid opinion, they are in the business to implementing all what the Elder said in his infamous tape.

These people are trying very hard to make Ghana look and feel like there is insecurity but none of their evil intent will come to pass. The battle is still the Lord's.

For Mr Asiedu's sake the least I write the better. I want to give this friendly quote to him from Korea " even a fish would not get into trouble if it kept it's mouth shut ". A word to the wise is enough.

Akufo-Addo commences process to remove Anin-Yeboah over $5m ...
42 minutes ago