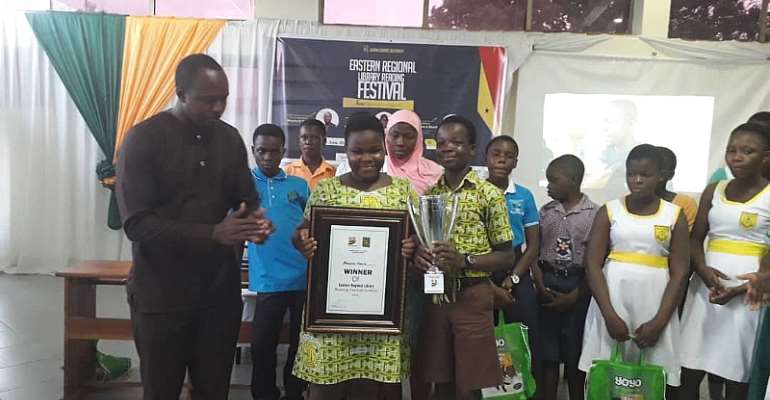 The Eastern Regional Library has organised its annual Regional and Spelling Competition for 20 Municipal/District Assemblies as part of activities earmarked for the year of reading.

The contest which formed part of the Reading Festival commenced from Circuit levels through to District levels with winners coming together to compete in Koforidua for the regionals.

The competition was keenly contested as the districts were put into groups with winners making up for the final.

Akwapim North District beats four others in the final to win the coveted prize and will represent the region at the national contest in September. East Akim and Nsawam Adoagyiri completed the top three spots.

The District Director of Education, Mrs. Mavis Yirenkyi advised pupils to take their books serious and ensure they read lots of books during their leisure periods.

She also encouraged teachers to use the reading period on the time table for reading to encourage the pupils.

The Representative of the Regional Minister, Mr. K. Teila congratulated the Ghana Library Authority for putting up such an event and encouraged stakeholders to support the initiative.

In a speech read by the Regional Librarian, Mr. Evans Korletey-Tene on behalf of the Executive Director, Mr. Hayford Siaw, he indicated that the Authority is poised to promote reading across the country.

He also indicated that 27,076 users patronised the library in Eastern Region during the 1st quarter of this year which is a 40% increment over the same period in 2018.

He further indicated that the Authority is designing a groundbreaking app which will enable users access library materials on their phones and other electronic devices.

The Ghana Library Authority in February declared 2019 as the Year of Reading with series of activities earmarked for the celebration.

Five major objectives were outlined with the first to promote literacy and lifelong learning. On this premise, several activities are being organised to mark the declaration.