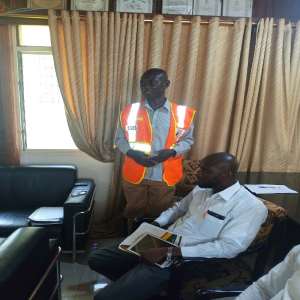 To enhance the management of disasters in the Berekum East Municipality of the Bono Region, an eighteen-member Disaster Management Committee has been inaugurated.

Inaugurating the Committee, the Municipal Chief Executive for Berekum Mr. Kofi Adjei charged members to see themselves as members of the National Disaster Management Organization in the Berekum Municipality.

Mr. Adjei added it is only when members of the committee see themselves as such that prevention and management of disasters could be enhanced.

He also stressed on the importance of the “in-house” committee so that the Municipality will not have to depend on external support always when there is a disaster.

On his part, the Berekum East Municipal Director of the National Disaster Management Organization (NADMO), Mr Kwadwo Agyekum said the composition of the committee from various departments and agencies will ensure that varied knowledge and expertise will be brought to bear on the prevention and management of disasters in the Municipality.

He urged members of the committee to work as a team to complement each other’s effort.