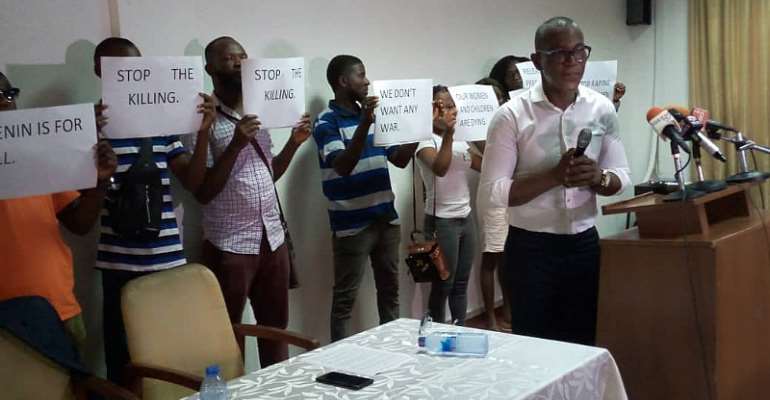 A leading member and former Presidential candidate of the opposition Alliance for New Congress (ANC) in the 2016 elections in Benin, Dr Prosper Ladislas Agbesi, has renewed his call on President Patrice Talon to step down to avoid eminent political bloodshed in Benin.

According to him, President Talon has unilaterally organised a parliamentary election last year without any of the opposition parties partaking contrary to the Will of the people of Benin.

Addressing Media Saturday in Accra, Dr Agbesi, who is also the Chairman of the Alliance for Sustainable Democracy in Africa (ASDA), alleged that Benin National Assembly has lost its independence as a legislative arm of Government and has been reduced to private enterprise of President Talon and used to engage in enacting laws only favourable to the President including extending the presidential term in office from five to six years.

The ANC leading members again called on the international community to intervene to stabilise the political crisis to avert a bloodbath in the coming weeks.

He said should the international community, including the Economic Community of West Africa, the African Union and the United Nations failed to step in the next 10 days, the situation would get worse as the security has turned their guns on the innocent but honest and humble people of Benin.

Dr Agbesi further warned that the current Parliament of Benin would collapse within the next 10 days, stating that, Members of the National Assembly themselves will step down in 10 days time because they have realized they have been misused against their own people.

"They think they're going to see better things that were why they allow themselves, but you know the people of Benin are honest people, so the honest ones will resign and parliament will collapse in 10 days to come."

Dr Agbesi warned that, the present situation does not look good, indicating that there could be bloodshed as the armed security are maltreating civilians, stating, "the people of Benin only have the moral arms and ammunition, the forces they are opposing have all the physical weapons and they will use them without restraint, because the president wants to control."

He also accused President Talon of plotting to assassinate former President Yayi Boni of Benin with poison as he has been put under house arrest and also accused the former Benin leader who stood for Africa Unity of corruption while taking control of the state ports and tax enclaves himself.

The opposition leader who claimed he is not interested in power should President Talon resigns, further called on the international community to impose sanctions on Talon so he restores democracy in Benin.

He also appealed to President Nana Addo Dankwa Akufo Addo, President Muhammadu Buhari of Nigeria, former Presidents John Agyekum Kufuor and Jerry John Rawlings and other Africa leaders to intervene to save the people of Benin.

Some Benin nationals present at the press conference with placards read, " Our Women and Children are dying. We want Democracy, Release President Yayi Bonni Benin is for All of Us, Stop the Killing, and many others."

The West African country has been hit with post-election violence, which Dr Agbesi attributed to President Talon for haven masterminded it in order to gain control of the resources of Benin and loot.