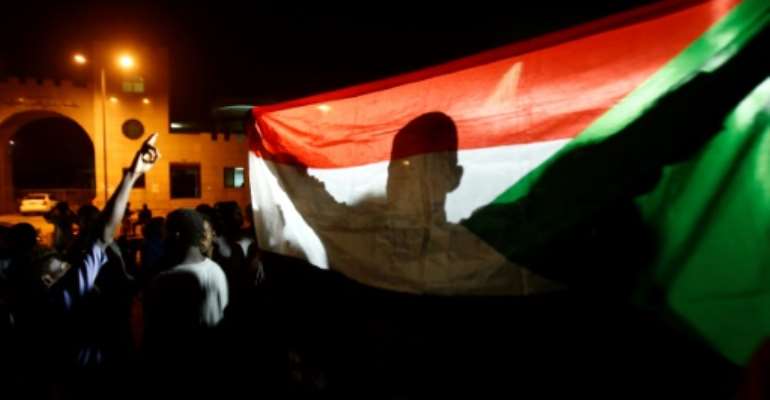 A man holds the Sudanese flag during a night-time demonstration outside the army headquarters in Khartoum on May 30, 2019. By ASHRAF SHAZLY (AFP/File)

The Sudanese movement whose protests triggered the ouster of autocrat Omar al-Bashir called Monday on its supporters to begin new night-time rallies to condemn the "massacre" of demonstrators at a Khartoum sit-in.

Thousands of protesters who had camped outside the Khartoum military headquarters for weeks were violently dispersed by gunmen in military fatigues on June 3, leaving dozens dead and hundreds wounded, according to doctors and witnesses.

The sit-in was held for weeks, initially seeking the ouster of Bashir and later to demand that the army generals who toppled him hand power to a civilian administration.

The protest camp was dispersed after talks between the Alliance for Freedom and Change, the umbrella protest movement, and the generals collapsed over installing a civilian rule.

At least 128 people have been killed in the crackdown on demonstrators, the majority the day the sit-in was cleared, according to doctors linked to the protest movement.

The health ministry put the June 3 death toll nationwide at 61.

On Monday the alliance called for new night-time protests as it released its "time-table" for this week.

In a statement, it called for night-time demonstrations in residential areas in Khartoum and other regions starting Tuesday to "ask for our main demands, which are transitional civilian rule and condemning the massacre of June 3".

The alliance said protests would also be held on Wednesday and Thursday nights.

"We are calling on our people in villages, towns and all over the country to participate and to print and distribute this time-table," the alliance said.

During the anti-Bashir campaign, the alliance had managed to mobilise supporters by posting such calls on social media networks, but since the June 3 crackdown the authorities have cut internet services across the country, making it difficult for protest leaders to connect with supporters.

Talks between the protest leaders and generals are, however, expected to resume following mediation led by Ethiopian Prime Minister Abiy Ahmed, but it is still unclear when they would actually begin.