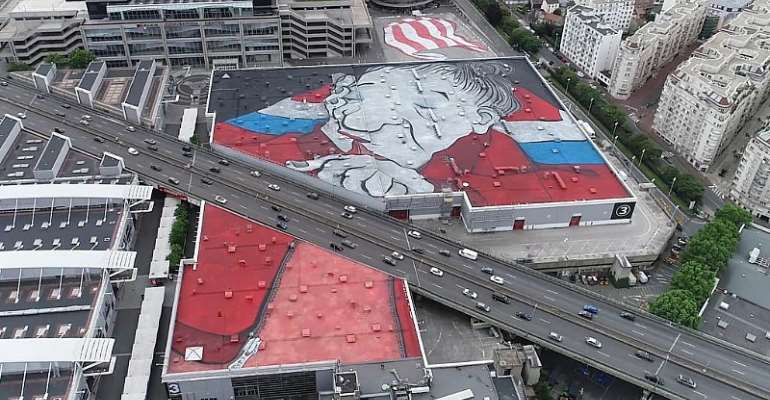 French graffiti artists Ella and Pitr have painted Europe's largest work of street art on a roof of a Paris convention centre. Covering 2.5 hectares, the image of an old woman intersected by the ring road around the French capital can be fully viewed only from the sky.

For anyone standing on the roof of the convention centre hall at the Porte de Versailles in southwest Paris, the artwork appears as fields of red, white and grey, with occasional black lines.

Only from high above can one see how it adds up to an image of an old woman, looking down at the traffic on the Périphérique, the busy ring road that surrounds the French capital.

“Her eyes are half closed because she's very bored by all the fast stuff around her,” explains Ella.

“We wanted to find something with a lot of contrast with the geographic site,” which, as she notes, is teeming with traffic and pedestrians.

“It's as if she was at home looking out the window, a bit bored by the cars and everything in the city,” says Pitr. “It's a contrast between her way of living and the rest of society.”

The duo gained access to the roof through an arrangement between city officials and Art en Ville, a group promoting urban art in public places.

“Ella + Pitr make a place in the city for characters that we tend to forget, like this old woman,” says Olivier Landes, the group's curator and founder.

“Their characters are not fashionable, but they're the sorts of people that everybody knows: older people, neighbours, family members.”

A lot of paint
Ella + Pitr have created other large-scale works in France, Portugal, Chile, Canada and elsewhere since they met in the French city of Saint-Etienne in 2007.

The new work covers a surface equivalent to four football fields. It breaks the artists' own record, set with a mural in Norway in 2015.

Using acrylic paints diluted and loaded into spray cans, the artists completed the mural over eight days in June. This includes time spent waiting for rain to dry.

They are not divulging how much material they used, but Landes indicates it involved “a lot of paint, that's for sure”.

Artists used drones
And just as it takes overhead images to fully see the work, the artists relied on drones to create it as well.

“The artists referred to aerial photographs of the roof and oriented their work around the technical points, such as the air vents,” Landes explains.

Even from the roof of a nearby parking lot that provides the best lookout point accessible on foot, it is not easy to discern the image.

“We're counting on the Internet and the media to spread the aerial image, which will be viewed virtually, on a screen, like all works of urban art,” says Landes.

Commercial street art
The choice to create a large-scale work in an out-of-the-way location was a conscious decision to remain discreet, as well.

“Nowadays, you can find so many murals, paintings, on very huge walls full of colour,” Pitr says. “For us, it's more interesting to stay on the roof, so no one can see it. And if you really want to see it, then you have to look for it.”

As such, the work also critiques the commercial aspects of street art, from which has emerged a thriving market of gallery shows and auctions.

“At the beginning, street art was supposed to be in contrast with advertisement, and it's started to be the same,” Ella says. “It's full of colour and sometimes the theme is about nothing, like advertising.”

The artwork itself will exist until 2022, when the hall is to be demolished as part of a renovation project to prepare the complex for the 2024 Olympic Games.