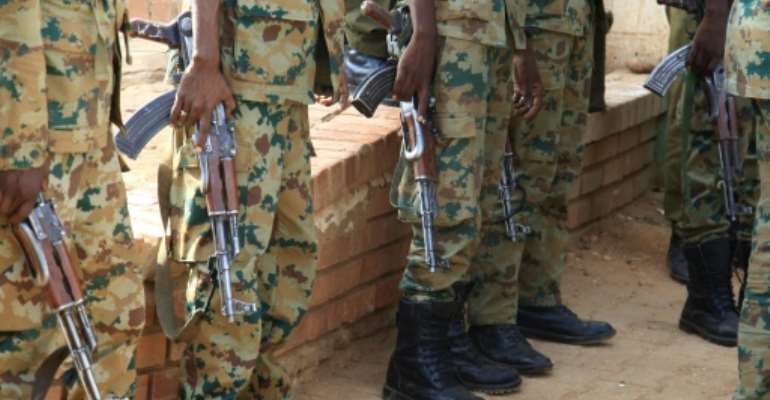 A top Sudanese general pledged to hang those responsible for the bloody June 3 crackdown in which armed men dispersed thousands of protesters camped for weeks outside the Khartoum military headquarters. By Ebrahim Hamid (AFP/File)

The EU on Monday blamed Sudan's military authorities for a bloody crackdown on protesters that left dozens of people dead, demanding a full investigation.

Foreign ministers from the bloc issued a statement hailing the protest movement that swept away former strongman Omar al-Bashir after three decades in power as "a historic opportunity for Sudan".

A top Sudanese general on Sunday pledged to hang those responsible for the June 3 crackdown, in which armed men in fatigues dispersed thousands of protesters camped for weeks outside the Khartoum military headquarters.

But the EU pointed the finger at the transition regime itself.

"It is clear that the responsibility lies with the Transitional Military Council (TMC) as the authority in charge of protecting the population," the ministers said in their statement.

"All human rights violations and abuses committed must be investigated in an independent and transparent manner, and perpetrators held accountable for their acts."

More than 100 people were killed in the crackdown, according to doctors linked to the protest movement, while the health ministry put the nationwide death toll at 61.

Spokesman General Shamseddine Kabbashi on Thursday expressed "regret" over the crackdown, but the council insists it did not order the dispersal, saying a purge had been planned for an area near the protest camp where people are said to sell drugs.

The EU called for "an immediate cessation of all violence against the Sudanese people" and backed African Union efforts to begin political mediation in the country.